The Numark Mixtrack Pro FX is the fourth rendition of this massively popular DJ controller. 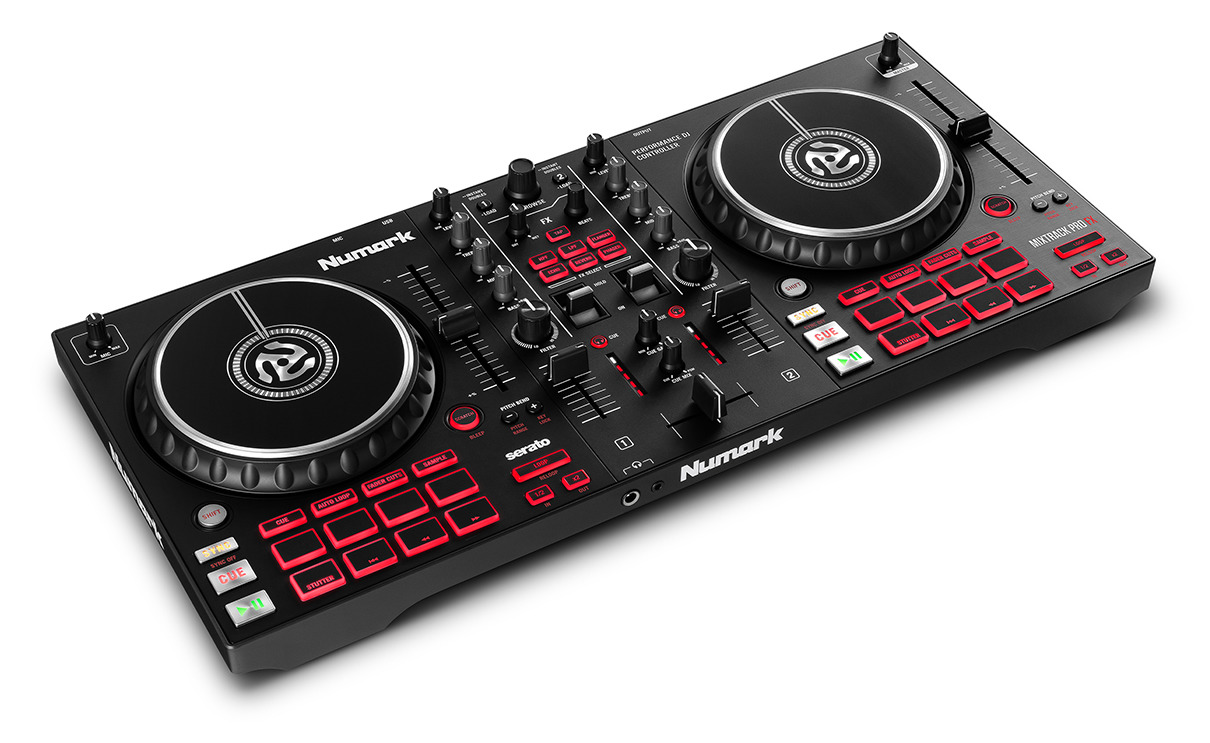 Since it was first released, the Mixtrack series has dominated the entry-level DJ Controller market and has been one of the biggest sellers for many years, not only in South Africa, but globally.

Today the Mixtrack series faces more competition than ever, as other major brands took note of its success and followed suit.

So how does the latest version, the Mixtrack Pro FX, compare?

Well, first it should be noted that the Pro FX is no longer Numark’s ‘entry’ entry-level DJ controller. They also offer the DJ2GO2 Touch and the Party Mix which are their cheapest options.

However, the Mixtrack Pro FX and its sibling, the Mixtrack Platinum FX, are without doubt the best choice for anybody who wants to learn to DJ properly and have a growth path from starting out to becoming a pro.

5/5
Very impressive build quality. Nice and sturdy with decent buttons and knobs and a reassuringly weighty feel about the Mixtrack Pro FX. Build-wise it does not feel entry-level at all.

4/5
The new layout on the Mixtrack Pro FX is a vast improvement on its predecessors. Its new dual deck and mixer combo layout makes the transition to pro club gear easier. The controller has a strong feature set limited only by the supplied Serato DJ Lite software.

3.5/5
The Mixtrack Pro FX sports a 44.1 kHz, 24-bit audio interface so you cannot really go wrong. Entry-level controllers don’t usually have the same quality components as high-end gear for obvious reasons but for home use, club rigs and portable PA, it sounds great. I’m not sure how the Pro FX would fair on a big festival rig, though.

5/5
Great bang for your buck! How far the Mixtrack series has come from the original Pro I is remarkable. You can go cheaper with Numark's Party Mix but to be honest this is the perfect controller to start DJing on, ideal for beginners and for jamming with your mates at home.

Unboxing the Mixtrack Pro FX, my first impression was, ‘wow this is really solid and quite heavy.’

As in, solid, dependable and reassuringly weighty.

Having tested every version of Mixtrack controller released, the new Pro FX seems by far the most robust.

Remarkably the earlier lightweight plastic versions stood the test of time and could endure some beating. 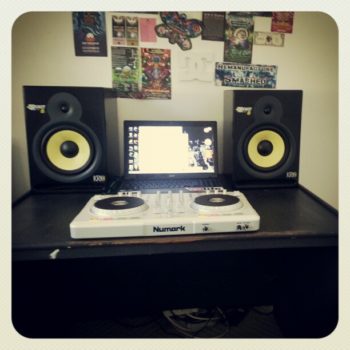 Josh’s first setup with the Mixtrack Pro I

I know this first-hand as I bought my son, Josh Mac, the original Mixtrack for Xmas several years ago and he learnt to DJ on the unit.

He really put it through its paces even doing his first club gigs on it too.

Today, circa 2021, he has played at almost every major trance festival in Cape Town so I can attest to him learning all he needed to know before graduating to industry-standard club equipment, i.e. Pioneer CDJs etc.

The Mixtrack Pro served him well to get to a professional level.

But back to the new Mixtrack Pro FX…

In the box you get a regular USB cable (you’ll need a USB-C adapter if that’s what your computer has), an actual printed user guide which is quick and easy to flip through, and of course, the controller itself. 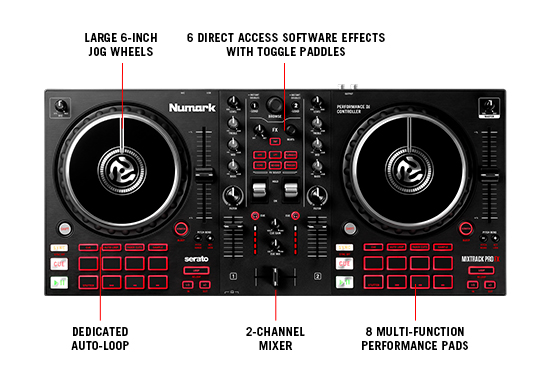 The new Pro FX takes on a similar shape to its predecessor, the Pro 3, which saw Numark move away from the chunkier shape of the Pro I & II, to a slimmer but longer, more rectangular look.

Both aesthetically and practically this new shape is a big improvement on the originals. 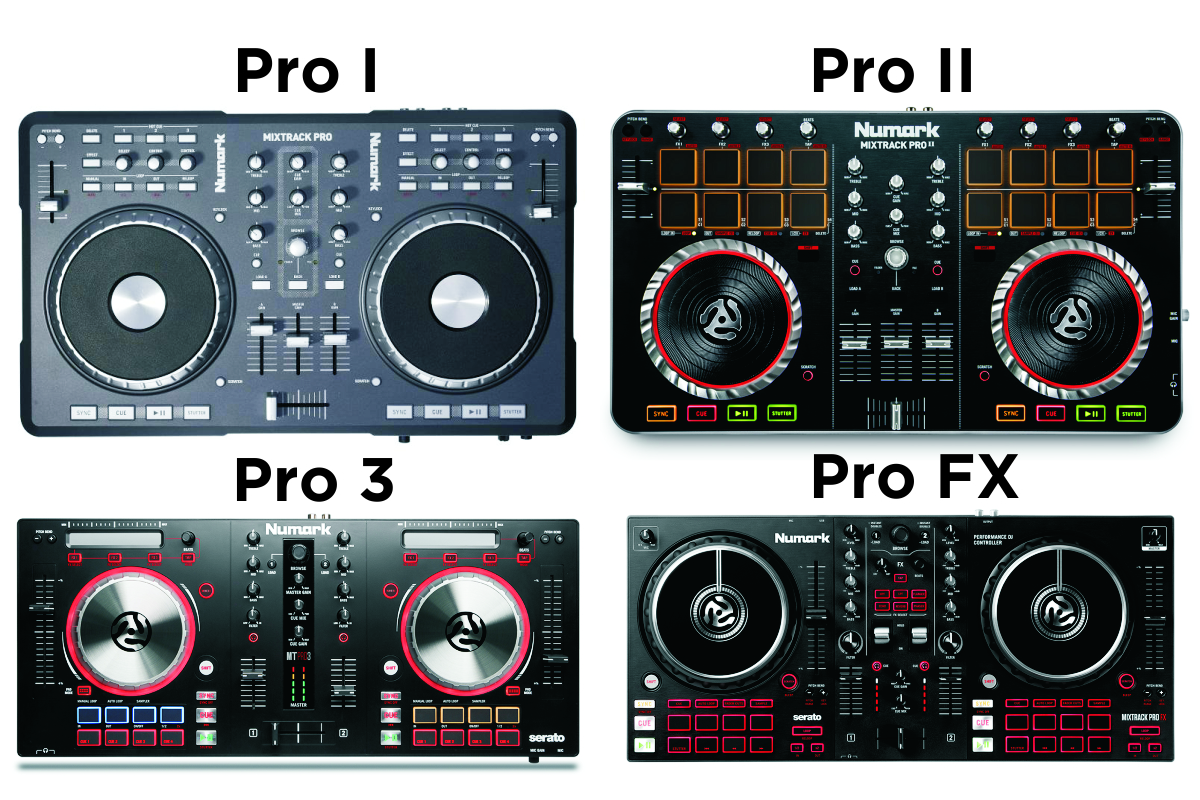 The Mixtrack has progressed from clunky to classy

The new format also sees the two decks take on an identical layout, not mirrored like the Pro 3 which had the tempo sliders on the outside and transport  buttons on the inside.

Now, both decks look the same which is exactly what two CDJ decks in a club would look like. It actually makes the entire unit look more like two decks and a mixer joined together and has more of a ‘pro club gear’ feel.

The FX have also moved to the mixer section, they’ve added two nice big filter knobs and have introduced paddles to control the FX. More about this later.

There’s also an extra set of pads under each 6-inch jogwheel and each deck now has its own dedicated traditional CDJ-style loop section meaning you don’t have to use the pads for this.

I was super impressed with the thoughtful layout even before I’d switched the unit on!

As mentioned the FX have moved to the mixer section. Before they were at the top of each deck.

The shortcoming of this new placement is that you can’t run different FX on different channels simultaneously, nor can you combine more than one effect at the same time.

Some may not like this, but I actually prefer the new setup because having the FX section front and centre encourages one to use them more. When they were stuck away in the corners it was easy to forget that they were even there.

From a practical perspective one usually ‘effects’ either the track currently playing or the one being mixed in, and since this is an entry-level unit, having four good post-fader FX, plus two filters (high-pass and low pass) gives you plenty of armoury to get creative with your mixing.

Add to that the performance pads and the paddles for activating the FX and one can create some pretty gnarly soundscapes. 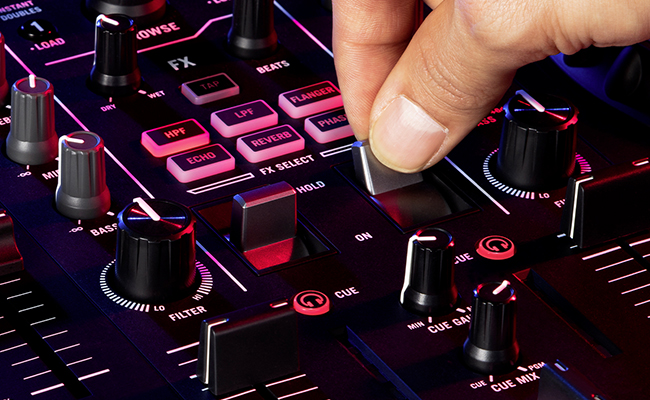 Paddles were first seen on battle DJ mixers like the Numark Scratch and this is the first time I’ve actually used them.

I love the paddles!

Central mode is off, pull it down to temporarily activate an effect. Once you let go it returns to the central off position, or switch it up to hold an effect until you deactivate it by pulling it back down.

The paddles are so simple but so effective and together with the large filter knobs, you now have a perfectly dedicated FX section on the mixer. It’s just a really intuitive layout and I found it really encouraged me to use them creatively, when placed so centrally. 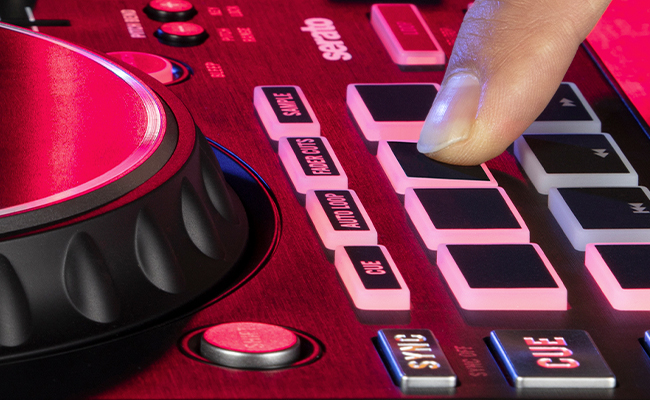 What it does is rhythmically cut the track in and out on the beat, similar to gating the audio. You can cut a track into 2, 4, 6, or 8 times depending which pad you press and this is a great addition that also works really well on vocals or acapellas.

When combined with one of the FX or the filter, or both, you can create some amazing extra emphasis on a build-up before the drop, for example.

The Mixtrack Pro FX includes both 8 and ¼-inch headphone jacks, VU meters per channel (none for master but this is viewable in Serato), pitch bend buttons which also duplicate as pitch range and keylock buttons, plus a mic input jack with volume control.

The platters can also be set to scratch mode, simulating a vinyl deck.

The tempo sliders are impressively long, something that will really assist new DJs learning to beat-match as they offer more accuracy. The pitch range feature also means you can mix diversely different music styles, with big differences in bpm, with ease.

Finally, the ‘bleep’ function, activated by pressing the Shift & Scratch buttons together, reverses playback and there is, of course, the obligatory crossfader too.

Would I buy a Numark Mixtrack Pro FX?

If I was starting out or had to choose a DJ controller for my son, again now, the answer is a resounding yes.

In the space of about nine years, the Mixtrack Pro FX has become an entirely different beast to the original.

While somehow keeping the DNA of the Pro I, this new model offers so much more and really is the ideal starting point to learn to DJ.

It is equally suitable for any DJ, no matter the level you are on, to have a Pro FX handy for mixing at home or dropping tunes with mates while having a party or a good old fashion braai (barbeque).

The accompanying Serato DJ Lite is limited but the controller, with its feature set, gets the best out of the software and if so desired one can upgrade to the Pro version when ready.

Grab yourself a Mixtrack Pro FX and get mixing today. You won’t regret it.