You can read my review of the new Mixtrack Pro FX here.

5/5
The Mixtrack Platinum FX is a well-built unit that feels sturdy and weighty. The chassis seems durable and the knobs, sliders and pads are all pretty solid. The 6-inch jogwheels have a definite feeling of quality about them too.

4/5
A+ for looks. The 4-deck control plus the added high quality jogwheels and cool displays all add up to a fun controller to DJ on. Novel features such as the FX paddles and the ‘Fader Cuts’ effect also offer something different to other controllers in this price bracket.

3.5/5
The Mixtrack Platinum FX sports a 44.1 kHz, 24-bit audio interface which is great. The unit was tested in studio and sounded good. We're just a little reluctant to recommend it for a big outdoor festival rig or massive club sound system, but then again, is it designed for this? For small parties, bars and home jam sessions it's a 100% winner.

5/5
A definite 5 out of 5 on the value for money scale. It seems the most robust of the Mixtrack versions made so far and from previous experience, these controllers tend to stay the distance. All the controls feel good, the jogwheels are fabulous and it has a great feature-set including 4-deck control.

The Mixtrack Platinum FX sports a similar shape to 2016’s Platinum and the Pro 3 albeit a tad heavier at 2,3 kg.

This is when Numark decided to opt for a more rectangular, less boxy look and with the new FX range, they have made the entire unit even better.

The Platinum FX feels solid and reassuringly heavy but still portable enough to move about and carry to gigs although this longer shape as introduced in 2016, may not be as backpack friendly.

These units, and most other budget-friendly DJ controllers, traditionally were quite light and flimsy, so this is definitely a big step forward.

In the box, together with the controller, you will find a USB3 cable and some paperwork which includes a surprisingly straight-forward printed user guide to tell you what each button, rotary and slider does.

For newbies this is a really helpful booklet as it explains each feature in simple easy-to-follow terms so I would certainly recommend spending 20 minutes reading it.

The Mixtrack Platinum FX is powered by USB and is USB-C compatible, however it only comes with a standard USB cable so USB-C laptop owners will need to buy the adapter for this. 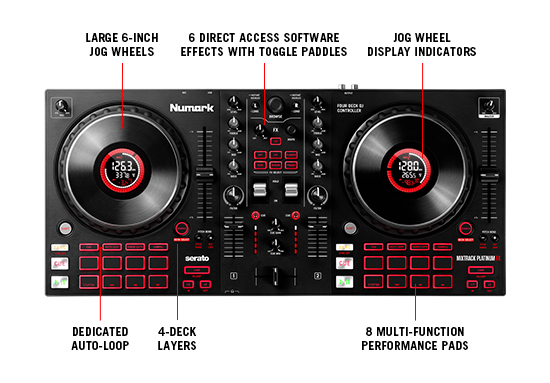 As mentioned earlier, the new shape for the Mixtrack range is a big improvement on the originals and they have a really sturdy workmanlike look and feel about them.

There are four major layout changes in the new Platinum FX.

Firstly, the deck layout is new.

Each deck is now identical.

Previously the decks were mirrored which meant the tempo sliders and transport controls would either be on the outside or inside of each deck.

Now, each one resembles a standalone deck / mixer combo which is what you’d get on pro club gear.

There is no major practical advantage of this, especially if you’re new to DJing.

But if you’re planning on learning on a Mixtrack Platinum FX with the goal to eventually playing pro gigs in clubs on the club gear, then this new layout makes more sense as it mimics the aforementioned.

The second big change is that the FX are now located on the mixer. Previously each deck would have its own set of FX controls.

The third big difference is the new, very tactile 6-inch jogwheels, which I think is a first for a controller in this price range.

The FX section can now be found on the central mixer console.

By default, the filter is active without pressing either the HPF or LPF buttons and is controlled by the prominently placed large filter knobs on each channel.

Aside from activating the FX via each button, there is a centrally controlled dry/wet rotary, a tempo tap button to tap in the beat and a beats rotary for setting the timing on an effect instead of tapping.

This entire section, except for the filters, are limited to one setting for both decks and also only one effect at a time.

You can, however, activate the assigned effect on both channels simultaneously via the new Paddles.

The paddles have three settings: OFF – central default setting, ON – pull the paddle down to activate selected effect and when you let go it snaps back to off, and HOLD – a clickable switch which keeps the effect on when pushed up even if you let go and will only return to off when pulled down. 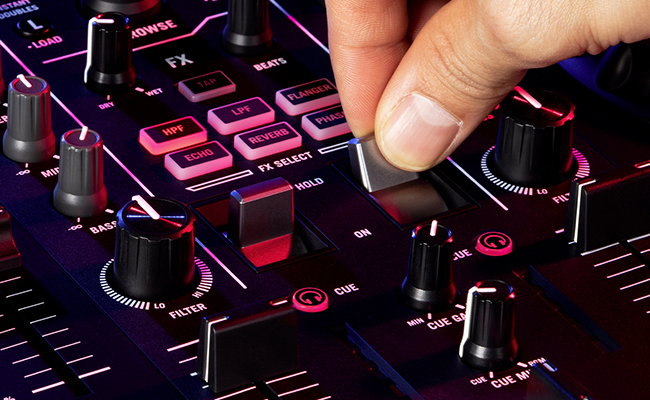 The Paddles are a great addition and really enhance the performance aspect of using FX. I found it encouraged me to use them more often just by virtue of their placement and size.

Combine these two with the performance pads and you have a pretty strong arsenal of creative options to enhance your mixing.

The performance pads, placed on each deck, are rubberised and backlit and can be used for triggering hot cues, loops, basic Serato sampler control and Numark’s new feature, ‘Fader Cuts.’ 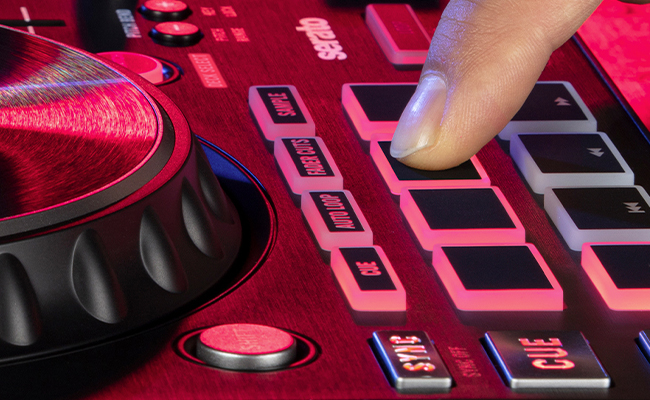 ‘Fader Cuts’ simulates the effect of using a crossfader to cut a track in and out during the mix like a scratch DJ would do, except using the pads instead of the crossfader.

It’s certainly not limited to this and is great when dropping acapellas in the mix or when used together with the filter and FX in a break or build-up, before the big drop. It creates a kind of gated effect but choppier.

The nifty jogwheel displays and the ability to control four decks on this one single unit in Serato are the two main differences between the Pro FX and the Platinum FX.

The platter displays may seem a bit novel and a ‘nice-to-have,’ and if you’re controlling just two decks, I’d agree, although seeing the bpm, time remaining and tempo variance without squinting at your laptop screen is a bonus.

But where these displays become vital is when one uses 4-deck mode, as the platter shows which deck is active on that channel. 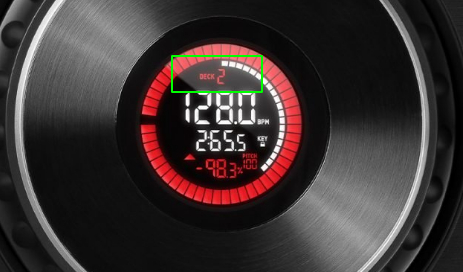 You may have noticed by now as you look longingly at the Mixtrack Platinum FX that although it’ a 4-deck controller there are only two physical channels on the mixer.

This is where this button below becomes important.

By toggling the ‘deck select’ each channel changes between either deck 1 & 3 control (left side) or deck 2 & 4 control (right side).

To keep track of which deck is active on the channel simply look at the jogwheel display.

Controlling four decks with two physical mixer channels can seem confusing at first but with a little practice it is actually not that challenging and is loads of fun.

Plus it can really enhance one’s DJ sets, especially when playing more minimal house or techno or for dropping in looped beats or an acapella.

Notable additional features on the Numark Mixtrack Platinum FX include 1/8” and ¼” headphone jacks, VU meters per channel, pitch range and keylock buttons plus a mic input with volume control. 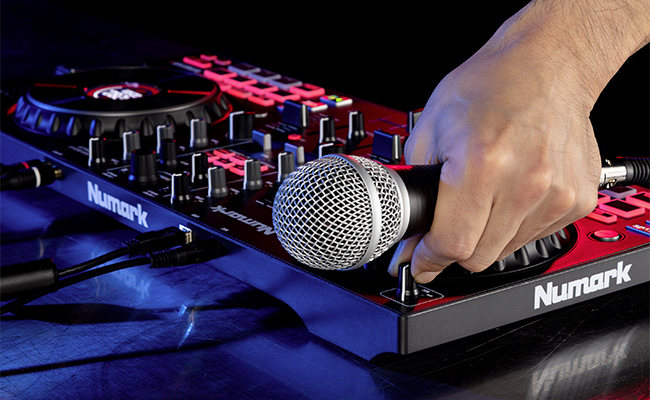 The uber long tempo sliders are exactly what you will need should you wish to learn to mix manually without using the sync button, as they offer higher accuracy.

The mixer channels have 3-band EQ plus a trim/volume control per channel and each deck has a conventional CDJ-type loop function.

Although looping can also be done on the pads, by having these loop buttons (bottom corner of each deck), one can use the pads for fader cuts while looping at the same time.

The jogwheels can also be used in scratch (vinyl emulation) mode or like CDJs.

Solid, functional and intuitive are the three words I’d use to aptly describe the Mixtrack Platinum FX

Along with the Pro FX, depending on whether you want 2– or 4–deck control, both are ideal for beginners or for more experienced DJs simply looking for a decent unit to jam on at home.

Highly recommended at the price point they are currently selling at.