The Numark Mixtrack Platinum is one of several new DJ controllers from the massive USA based tech company and it enhances the budget section of their range considerably. 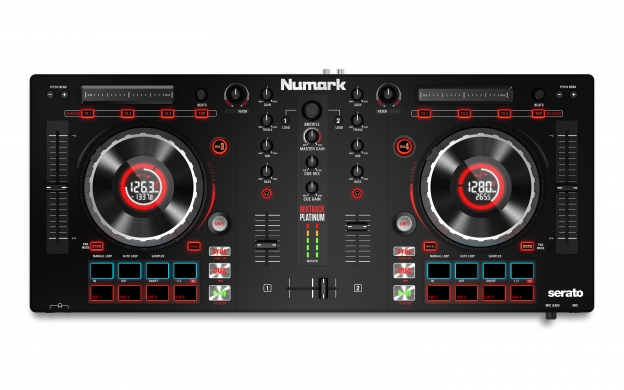 In essence the Numark Mixtrack Platinum is a Mixtrack Pro 3 except with the added feature of the LCD displays on the jogwheels.

This is not  a bad thing since the Mixtrack Pro 3 is an awesome budget DJ controller. You can read our review on it from last year. We considered it to be the best Mixtrack so far.

The Numark Mixtrack Platinum has several redeeming features that make it a fantastic unit even without the added LCD jogwheel display. 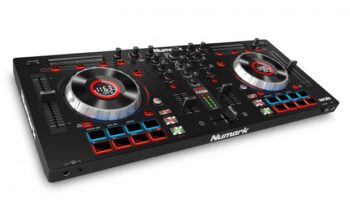 These include things like 4 deck control; the only snag here being that you need to upgrade the version of Serato that comes with the controller to make use of the 4-deck option and this cost an extra $ 100 – R 1,400.

There are also 16 performance pads for manipulating FX, triggering cue points and the Serato sampler.

The Touchstrip is another ‘pro’ feature found on the Numark Mixtrack Platinum that places it comfortably in competition with more expensive units. The Touchstrip can be used for quickly ‘scrubbing’ through a track to various sections.

But the standout feature on the Numark Mixtrack Platinum has to be the 100mm pitch sliders. You may be wondering what the big deal is about these; accuracy! A 100mm slider means you can match tempos up to 1/100th of the actual bpm and therefore have tighter mixes. If you’re planning on learning to beatmatch oldskool without the sync button, then this is actually a biggie. 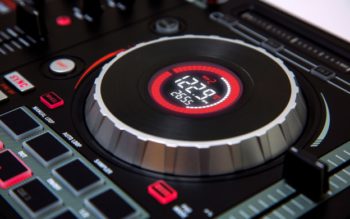 The jogwheel LCD display is cool. They are dual colour, nice and clear of reasonably high res.

There are two rings of lights on each platter. The first ring indicates that the track is playing on that channel something that becomes even more significant when controlling 4 channels.

The second ring is a progress bar which runs clockwise to show you how far into the track you are and the closer you are to 12 o’clock the closer the track is to ending.

There is also a time left (‘toggleable’ to time lapsed) on each wheel.

The display also tells you which deck is being controlled, an important feature when controlling 4 decks with a 2-deck unit and a really rad feature, especially for beginners learning to beatmatch is a little arrow which tells you whether to coax the platter forward or back to get it 100% on the beat.

Lastly the display also informs if the keylock and slip mode are engaged.

The Numark Mixtrack Platinum belies its plastic build by feeling somewhat solid. Sound quality is decent although these days most controllers all sport decent audio.

The simple plug and play installation means just plugging the USB powered unit in, firing up the included Serato Intro and starting to mix!

Possibly the most refreshing thing about the Numark Mixtrack Platinum though is that the jogwheels are quite heavy. I assume this is due to them housing the displays but then what you get is a really substantial platter feel to the jogwheels, unlike the usually light feel of most budget units.

Would I use a Numark Mixtrack Platinum to DJ on? Yes I would.

Would I recommend the Mixtrack Platinum to a newbie DJ wanting to learn to mix?

Most definitely. In fact it may be the first one I suggest. It’s that good, especially for the price.