You are here: Home / News / Black Coffee drops a South African groove bomb on the Hi Ibiza line up

Black Coffee is sure to wake up Ibiza this summer with the addition of South Africa’s premier mix artists on the line-up.

Black Coffee will be playing at ‘Hi Ibiza’, formerly known as ‘Space,’ every Saturday from 3 June until 30 September.

What’s a party without friends?

Black Coffee has curated a top-notch line up of international flavours and grooves to accompany him through this summer.

Black Coffee has also put &Me, Adam Port, DJ Angelo, Peggy Gou, Wizardry and countless more on the line-up for Hi Ibiza, the newest club to grace the shores of this party mecca. 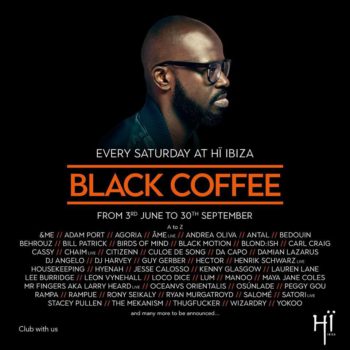 As Black Coffee stated, “since the start of my career, I’ve been driven by the desire to share my taste in music and expose the world to the beauty of South African dance music.”

It is with this desire that he has added some of South Africa’s finest artists on the Hi Ibiza summer line up.

Culoe De Song will perform in August and De Capo gets his reward for sticking with Black Coffee’s Soulistic label by playing on 3 dates throughout the summer. Last year there were suggestions that Da Capo was unhappy at Soulistic.

What would a line-up be without Saffa duo Black Motion who have been making some serious waves globally.

The slightly left-of-centre Hyenah also gets a go Ryan Murgatroyd deservedly is on the lineup after the incredible Africa Gets Physical showcase he delivered for Get Physical Records.

Black Coffee has it sorted and it’s amazing how much SA talent he is sharing with the club capital of the world.

With Hi Ibiza being the newest club at this party paradise, we’re confident that Black Coffee will knock their socks off.