Porter Robinson’s Second Sky Festival that took place last year has become the inspiration behind an upcoming virtual music festival set to take place in the world of Minecraft.

Seeing as festivals and events around the world have been postponed or cancelled due to COVID-19, a virtual festival is exactly what festivalgoers need to get through this time of isolation. Thanks to dedicated fans and artists, the virtual gates will open at the Second Aether tribute festival.

While little information is known at this time, admins on Second Aether’s Discord server have announced that more information is soon to follow. At this point in time the dates and artists have been revealed, which, let’s face it is more than enough to pique interest.

An artist involved has also stated that the digital festival area will be a recreation of the real-life Second Sky festival grounds. 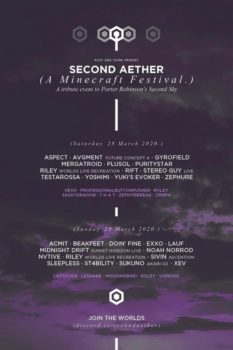 Second Aether is set to take place on 28-29 March on a yet-to-be-shared Minecraft server. Artists featured on the line up for the 28 March date include Aspect, Gyrofield, Megatroid, Plusol, Puritystar, Stereo Guy, Yoshimi and more.

For more information on the Second Sky-inspired Minecraft Festival, you’re welcome to join the discussion on the virtual festival’s Discord server.