You are here: Home / Featured / LOUD – 10 years of pioneering psytrance 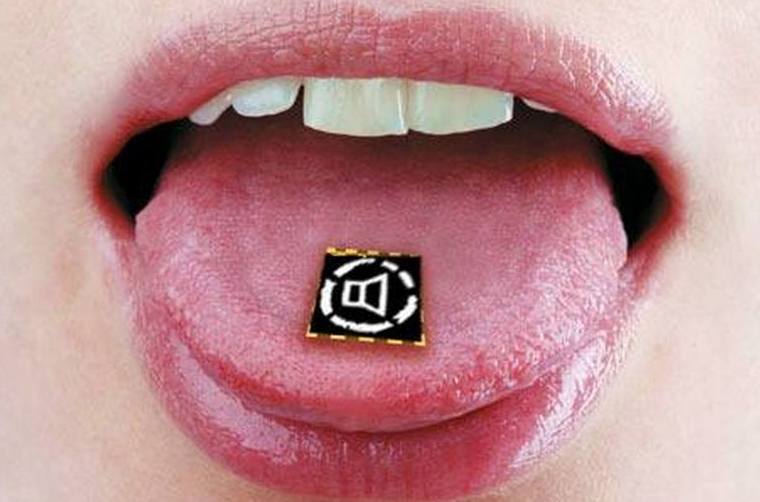 If we were making 100 % original music people would probably not dance… It’s no shame to make people happy with simple triplets and predictable drops.”

LOUD are one of those artists that, to me, it feels like they’ve been around since the Goa Trance days. Perhaps it’s because their early sound did hark back to that era. Or maybe it’s just that they really, really like outboard gear so much and tend to sound more organic than most. 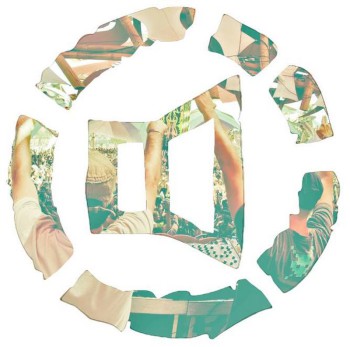 I think the main reason though is that they have had such an indelible impact on the global psytrance scene, not just with what they do to a dancefloor but because I think they are one of those artists that many psy producers admire for their individuality amidst a plethora of generic same sounding psy…

They are without a doubt one of my favourite producers of the genre on the planet right now and I got to ask them what their journey has been like as they celebrate 10 years of very LOUD psytrance….

First off congratulations on 10 years of  LOUD. To be honest I actually thought you guys had been around for longer than that. I think that shows what an impact you’ve had on the psy scene. When you look back does it feel like yesterday or has it been a long road of musical discovery?

Kobi: For me it was both a short and long journey (10 years after all.) It took some time [for us] to reach and create our style and sound.

Eitan : Feels like both;  yesterday – as in how the time flies, but even more like a long journey when I think about all that we’ve learnt.

What impressed me when I first heard LOUD (and I think many people in the scene) right from the start was that you guys seemed to be intent on resisting ‘the formula’ and your sound was almost oldskool, especially your first few releases… 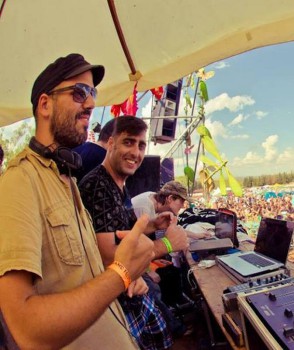 Kobi: Yes the whole idea from day one was to try to create something that did not follow the generic formula and to show that there are many ways to create psychedelic trance.

Eitan : Our first track was called “No more X.” It was never released although we named an album after it. It was like psytrance was sounding almost the same everywhere (and that was 10 years ago). It even got to a point that half of the acts had X or something in their name, so no more X meant ‘no more of the same’! We love the old sound ‘cos it was from a time when each artist had their own distinct sound . . probably as a result of less communication over the internet or something. People had to have personal journeys. Anyway we respected the music we grew up on and wanted to take a part of that with us.

Your ‘Psytrance is shit’ video was brilliant but also poked fun at a lot of producers and the German Hamburg sound particularly.  Were there any people in the industry (you don’t have to mention names) that were really pissed off with you guys and sent you messages or hate mail?

Kobi: Not that I know (but I’m sure there were a few). It was just a joke for people to appreciate but some went really far with it and asked to remix that track [laughs.]

Eitan: I think a lot of people may have been pissed off [laughs]. But if you know you are doing something right you should not be ashamed of it. After a while everyone enjoyed it for the joke that it was. It was criticising everything including us and sometimes you need some humour in life to get over the hard times. Even being a DJ that plays every week is not an easy life, plus it’s not healthy to take everything in life so seriously.

A full album is your chance to give your real followers an experience. This is the way we grew up on music; an artist wants to express many moods and sometimes an album takes you much deeper to what the artist is all about.”

Ironically some of your newer releases have made use of triplets and gated sounds and some of the ‘clichés’ too. But in a much less predictable manner. I also love that your music has a touch of humour to it. To me this shows that you can laugh at yourselves as much as at the scene. What are our thoughts on this? 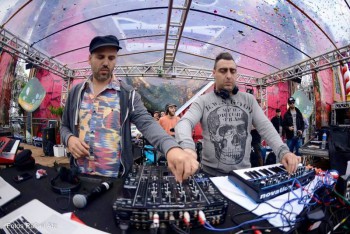 Kobi: We just wanna have fun… there are times that we are serious and deep and times that we are light and funny.  The feelings of a person are dynamic and when you are in the studio a projection of your feelings is a major part of the track that you are working on.

Eitan: It’s okay to laugh at yourself as well. If we were making 100 % original music people would probably not dance [laughs.] It’s no shame to make people happy with simple triplets and predictable drops. In fact making people happy might be an even higher spiritual thing than opening minds with new sounds, who knows. But one thing for sure is that there is a place for everything and thank god for diversity, it makes the world beautiful.

The last time you played in South Africa at Origin you really blew that dance floor away. I thought it was one of the best live sets I’d seen/heard in a long time. Your 10 Year set at Ozora looks like it was simply off the hook too.  I’m sure you had many highlights so far, but was Ozora 2015 the biggest highlight so far?

Kobi: Firstly thank you for your kind words. Ozora 2015 was definitely one of our highlights especially as we performed with our drummer and took a film crew with us from Israel. We also played our new album for the first time ever with no beat matching for 75 minutes of our set. The second part of the set we played some of our new remixes and some of our classics with new edits.

How live is your live set? Do you specifically remove certain elements from the backing tracks and then perform these live or do you run the full tracks and then use the outboard gear and FX to mash things up? I’m intrigued because I know that most producers use the excuse that they don’t want to play an unmastered track in separate parts because it won’t sound as good as the original mastered track. You guys on the other hand seem to take live performance very seriously….

Eitan: We’re still figuring this out. It’s always evolving. We’ve done 100 % live sets when everything is done on the spot with no arrangement, to just having part of the channels missing and adding sounds live. We’ve been playing live synths on stage a lot lately and have been working closely with Israel’s best Ableton certified instructors and  it’s always going to evolve. Usually you take on more than you can do and than removing stuff slowly until you find a balance. It’s better to do fewer things but do them well. I must say that working closely with Sebastian Mullaert (Minilogue / Son Kite) was a huge inspiration for this

Speaking of Minilogue, Eitan you’ve also got an album with Sebastian Mullaert due out soon. I am as intrigued about this as I am excited for a fifth LOUD album. Would you care to give the readers a bit of insight as to what it was like working with Sebastian and how you guys drew your inspiration?

Eitan : He is a very close friend and we share a lot of the same ideas and philosophies of lifestyle and especially studio life style. I must say that in many ways I look up to him and have learnt a lot from his approach to life. We are going to release our second album soon; it’s in the process.  I guess it’s just a very nice creative experience for both of us. I think a lot of the inspiration comes from nature. Our last album was done by spending 4 days outdoors and setting up a new studio every day in different landscapes and weather conditions (and it was just after I had finished building my new studio for 2 months… sooo hard [laughs]). We like to involve a lot of video art too and to improvise musically, I guess. 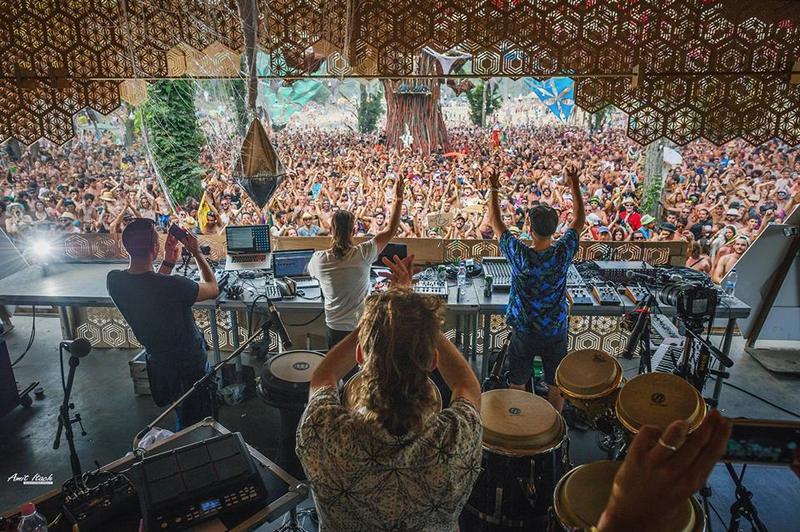 Back to LOUD I believe you have a fifth album coming out soon. I asked this question of Yoni (Ace) so I’m interested in your opinion too. EPs and singles and the whole nature of online and downloading has made it seem less important to put together an entire album today. I mean there is not even a guarantee that when it is available at online shops that people will buy all the tracks and ever listen to it as it was intended – from start to finish. I am oldskool so I still love full albums. What’s your motivation to do persevere with a full album? 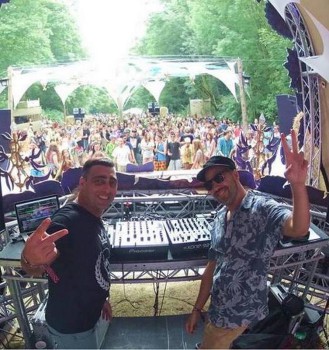 Eitan: A full album is your chance to give your real followers an experience. This is the way we grew up on music; an artist wants to express many moods and sometimes an album takes you much deeper to what the artist is all about. It’s like being at a show; Small Talk (our closing track) has a much stronger and more beautiful (also less cheesy) impact, for example, after a 2 hour LOUD journey, than it would have if you had just heard it on its own. So we should be thankful that there are people on earth (hopefully not only on earth) that take an hour out of their busy day to listen to our BS [laughs].

Talking of releasing music, you’ve had a great relationship with Nano records in South Africa. Their original sound was very much an afternoon light, bouncy style of psy. Today they’re easily one of the real psychedelic labels and you share an artist roster with some proper legends like Tristan, Dick Trevor, Laughing Buddha etc.  Has it been a good partnership to date?

Kobi: Nano has been our home for many years. The workflow with Regan and Monique  is just so natural for us; it’s like a big colourful happy family.

Final question; is global psytrance in good hands right now? Would you give it a good bill of health?

Kobi: Well it’s just getting bigger every year so I think we are on the right path …

Eitan : You never know. We will continue doing what we love and believe in it. We hope everyone else will do the same and than it’s left up to the world to decide.