Last week we discussed creating your own template projects from scratch, let’s expand that by adding synths and effects. 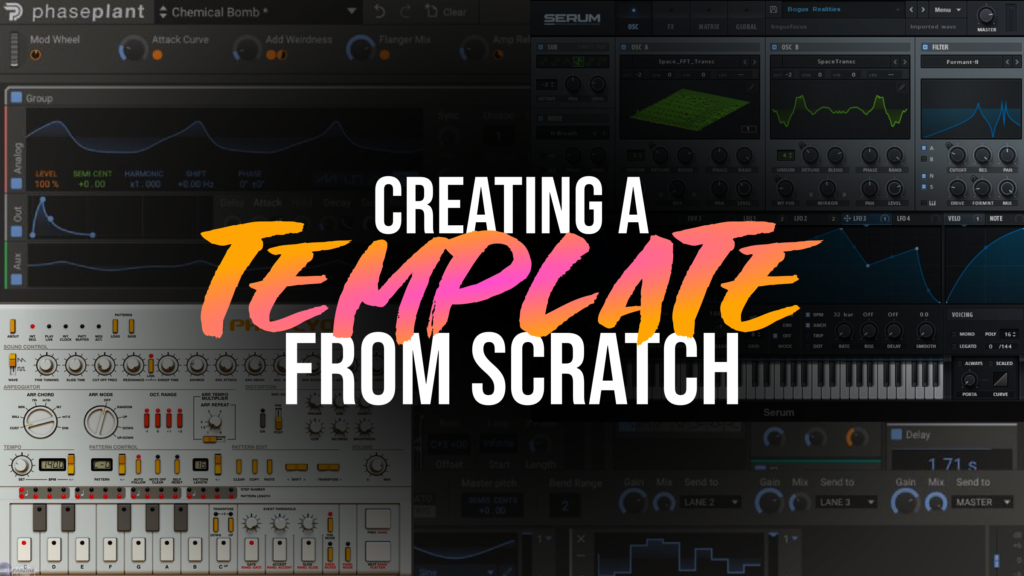 When creating my template projects, I like to load up most of the plugins that I use very regularly, beforehand. That way I don’t have to break the creative flow every time I want to add a new element – even that few seconds it takes for a plugin to load can be enough to break that momentum. I’ll even have a couple of instances of my favourite plugins loaded and ready-to-go.

Same with effects plugins, stuff like Reverbs and Delays which I may use on most of my channels will get an FX send channel – further speeding up the creative process. Even an INIT preset with a bit of Reverb and Delay doesn’t sound all that bad.

I use a lot of folders, sub-folders and groups – it helps a lot with project organization, making it much easier to jump in at a later stage and know exactly what is going on. It’s also a quick way of duplicating multiple channels, but keep in mind the routing will remain the same on duplicated folders.

Do the tedious set up now, to speed up workflow later…

I use MIDI clips as placeholders, I’ll often input a simple pattern just for a quick visual representation of what’s happening on the channel – then mute the clip or channel when not needed. I’ll usually leave a plugin or two with a step designer or other step sequencer plugin loaded for ready-to-go arps.

My sound effects channels, stuff like sweeps and vocal samples, will get their own group, folder and send FX channels. Furthermore, I will often load up Kilohearts Snap Heap to process these channels, as it offers a huge variety of different effects within a single plugin.

Like I mentioned in the previous tutorial, leave space for the imagination so that when you jump into the project you immediately feel inspired to add new elements.

Check out the tutorial video here: