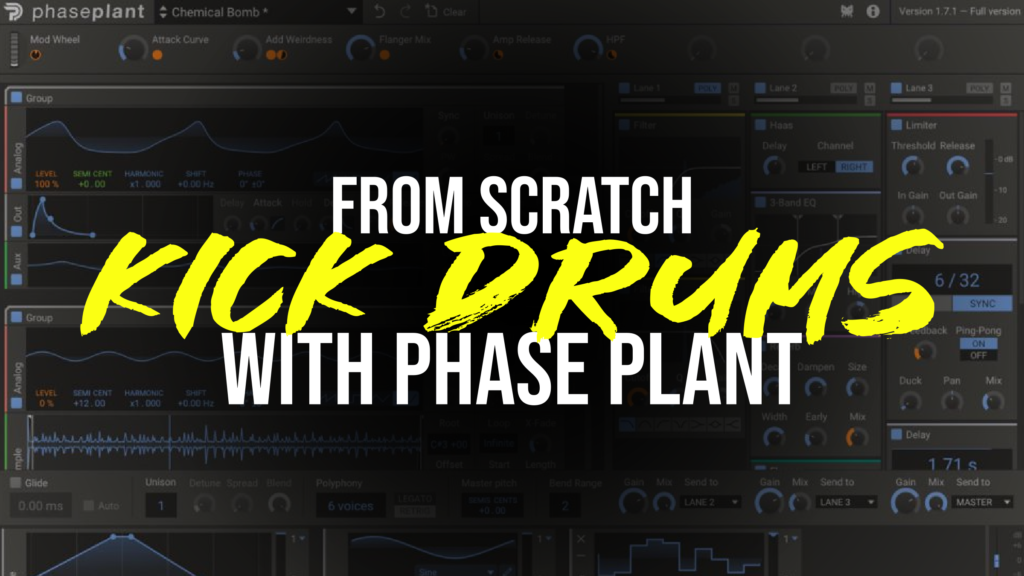 Today we are looking at creating a kick drum from scratch with Kilohearts Phase Plant. This plugin is particularly awesome for creating kick drums because of the fact that you can route each element to its own lane of effects and process them each individually. Not only allowing you to synthesize each of the components that make up a kick drums sound, but freely route them and apply effects as you please.

I usually go about creating three groups, two of which will have a sine oscillator and the other a sampler module loaded. Make sure they each have an output and route them each to their own effects lane, and make sure all of the effects lanes are set to output directly to the master (as they are set up in series by default). Once this is setup it’s easy to solo or mute an individual lane, for fine-tuning.

As usual a kick drum needs an envelope to modulate the pitch, you can set up several envelopes, however they are versatile enough to get a lot out of a single module.

Isolating the layers in time…

The Slice EQ built into Kilohearts Phase Plant is incredibly versatile, and the fact that you can use it to isolate each layer results in a very clean sound – especially when layering samples into the mix. When creating kick drums this way, I’ll generally add an instance of Slice EQ onto each lane, carve out just the frequencies I want in that lane, and then apply further effects depending on the source. The Kilohearts Transient Shaper is great on the transient layer, and distortion is also awesome on the sampler layer.

For an in-depth walkthrough on how to apply these techniques, check out the tutorial video here: