Today’s sound design tutorial focuses on a techy FM stab sound that was in the background of a previous video. 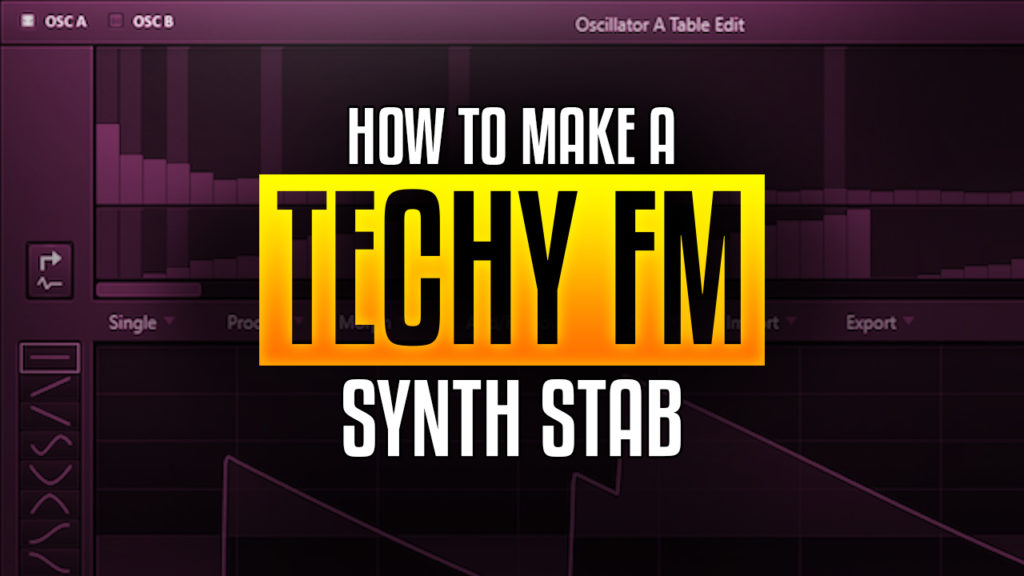 If you’re not yet familiar with FM, it stands for Frequency Modulation and in short it is using an oscillator to modulate the pitch of another oscillator. The result is a harsh metallic texture, however when altering the pitch of either oscillators, you have control over the speed of the modulation and the fundamental tone. When using lower octaves, the result is a deep grindy texture, and using different oscillator shapes gives you a huge variety over the nature of that texture.

So, the main idea behind today’s tutorial is creating two separate textures, and using something like the velocity input to control which textures are mixed in. The first layer is Serum’s built-in Noise Oscillator, with one of the default kick transient samples loaded up. If you keytrack the Noise Oscillator, it changes the speed at which the sample retriggers, and with some of the default samples it actually sounds a bit like FM – this is a pretty cool sound to even use as is, with a bit of filter.

The second layer is created using regular FM of two sine waves, however on the modulating oscillator I’ve used one of Serum’s unique wavetables that starts on a Sine wave and adds harmonics as you sweep through the wavetable – another quick and easy way to create variation.

Furthermore, I used some filter to bring out the mid-range a bit, some compression to round it all out and then some delay to give it a deeper spacey feel. This sound is in a Psytrance track however I’m pretty sure it will work pretty well in some darker techno or something along those lines.

For a more in-depth walkthrough on how I created the sound, check out the video here: