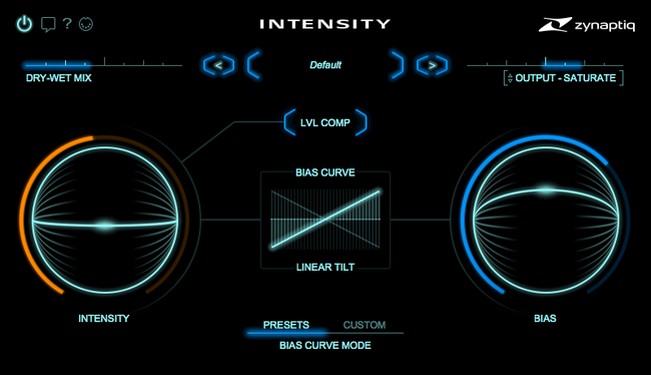 The plugin uses similar advanced algorithms used in facial recognition systems to bring out the elements which may be lacking in your mix. The plugin is designed to be super easy-to-use, it’s not aimed at the mastering engineers – more at producers and sound designers looking for a quick solution.

It’s also not limited to master buss processing, the plugin performs well on single elements, aimed at bringing out the clarity of the sound source. It’s as intuitive as it gets, utilizing a single knob to control the overall amount of effect applied. Furthermore, there are additional controls for dry/wet, bias and soft-knee saturation.

Zynaptiq Intensity is not a compressor, stress the developers, although it can be used in a lot of the same situations you would need compression. Maximise loudness, increase clarity and detail – there’s a ton of stuff going on under-the-hood. Essentially making your source sound a whole lot louder without changes the LUFS (Loudness Units relative to Full Scale) too drastically.

Because Zynaptiq Intensity is a completely new type of tool, the developers had some tricks to make the most of it. “In general, one bit of advice would be to not try to use INTENSITY in addition to all the usual tools with all their usual settings – start with using it INSTEAD of the other stuff, then gradually bring things back in. Basically, judge it in its own terms. It’s a new kind of processor, a re-think will open it up much more.” said Denis Goekdag of Zynaptiq.