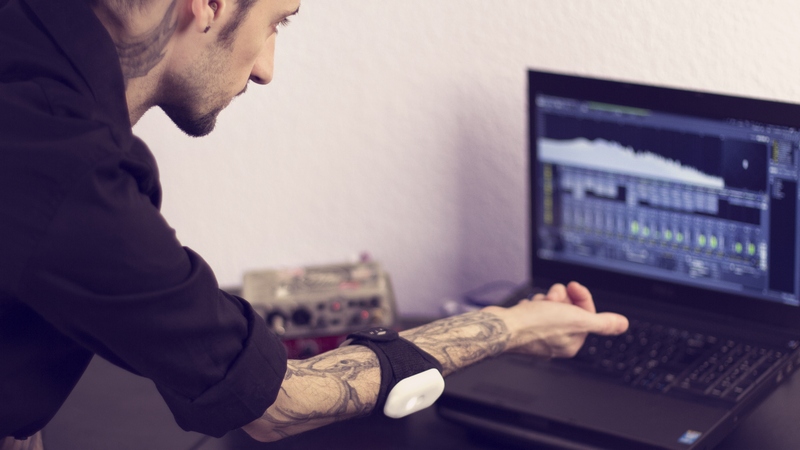 Featured on Kickstarter as its staff and tech pick of the day, the XTH Sense already has support from creatives such as My Brightest Diamond, DJ Spooky and Dana Leong.

The XTH SENSE is an interface to bridge the gap between your body movements and producing music, playing an instrument, gaming and virtual reality.

It’s pretty complex stuff. You can read their press release or just watch the video below for a better idea.

Today the creative team at XTH, a rich ecosystem and open platform focused on connecting technology and the human body, introduces the XTH Sense™, the world’s first biocreative instrument and next evolution in sensory expression. By harnessing the power of the body, the XTH Sense lets you interact with connected devices, musical and video software, games and virtual reality (VR) in a highly personalized and engaging way.

Cutting-edge, affordable, and open source, the XTH Sense’s ultra-light, wireless design features unique biophysical sensors and algorithms that enable access to the human body in nine dimensions and unlock the ability to uniquely connect and create with one’s unique biological signature & gesture. These biomedia based experiences are called biocreative interactions.

“The rise of our biology as the new digital interface is upon us; our bodies can become a powerful medium each containing a unique and distinct message,” said Heidi Boisvert, co-founder of XTH with Marco Donnarumma “With this guiding influence we took a radical approach to the current wearable market. Instead of using technology to examine and quantify our biology, we are seeking to understand and amplify the creative and human expression of our bodies.”

“If you have a body, you are a creator with the XTH Sense. In fact, our software is designed to be so easy to use that children can play and create with it,” said Donnarumma. ”It is the first instrument to establish a direct connection between biology and media. This is a stark contrast to the current direction of the wearable market, which views the body purely as data to track, measure, and analyze – whereas the XTH Sense, the first biocreative technology, reveals the human body as more than data.” 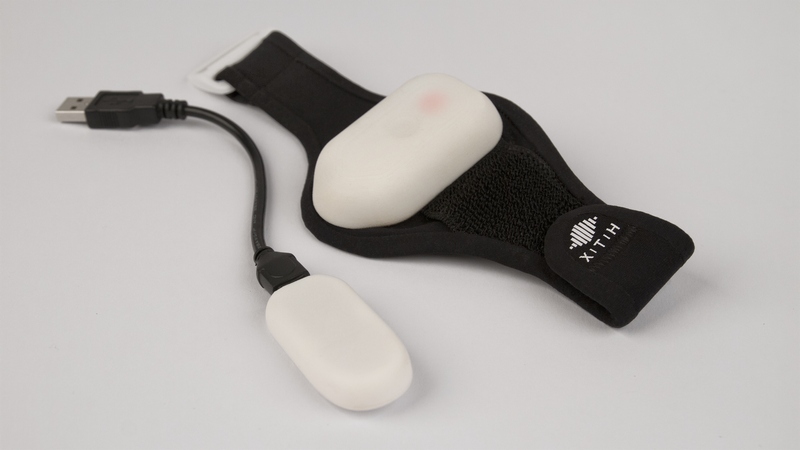 The XTH Sense consists of a wireless wearable, its companion XTH Software Suite, including a plug & play application and native plugins for your favorite creative programs, and the XTH Hub, a web platform for sharing applications, data and ideas for XTH Sense projects. To accomplish the amplification of the inaudible and often subconscious biology, the XTH Sense is equipped with five biophysical sensors that enable it to capture the sound of muscles contracting, the heart beating and blood flowing, as well as body temperature, motion, orientation and rotation. This symphony of highly sensitive biosensors captures sound and motion produced by the body in repose or in action. The XTH Sense transmits these sound and data wirelessly over radio frequency to communicate with the XTH Software Suite. Through intelligent algorithms, the XTH Software Suite extracts the expressive features of the body: movement dynamics, muscular energy and temperature changes. With the XTH Software Suite, the expressive features of the body and its raw data can be used to control musical parameters, create digital drawings, interact with game mechanics and play in VR. In addition, the XTH Software Suite is ready out-of-the-box with plugins for the most popular third party software across creative and scientific disciplines.

Developed by and for performers, interactive artists & game designers, the XTH Sense is the most accurate, most precise and most customizable device of its kind. It learns subtle and unique nuances of the body by extracting precise biological features, such as the acoustic properties of the body, data patterns created by motion, and changes in body temperature. These various biosignals form the basis for any creative expression or biocreative interaction, whether it is the chord progression in a musical composition, live drawing in a virtual environment or the designing of game mechanics in a fantasy world.

The applications of the XTH Sense are endless because it does one simple, yet visionary thing: transforms your unique expressive biosignature into a creative digital interface. With every use, it learns and leverages one’s individual physiology to create highly sensitive and unique gestures, adapting more upon each application. As use increases a unique bond between the XTH Sense and the individual grows, and the XTH Sense builds a local library of bio-adaptive and personalized gestures. In addition, it is designed to be so sensitive that it captures the most subtle nuances of the human body so it is able to recognize personalized micro-gestures using tiny movements of the fingers, subtle changes in muscular tension, or simply the imperceptible beating of the heart.

The XTH team has already achieved recognition for the XTH Sense from national authorities on creativity and technology. In 2012, it was awarded the “world’s most innovative musical instrument” by the Georgia Tech Center for Music Technology, and later it was acknowledged for innovation by Harvestworks’ Creativity + Technology = Enterprise Fellowship through support by the Rockefeller Foundation. In addition, the XTH Sense™ is supported by a rich ecosystem and passionate community of active technologists, hackers, and creators who are gathered together to foster innovation and collaboration via XTH’s open platform.