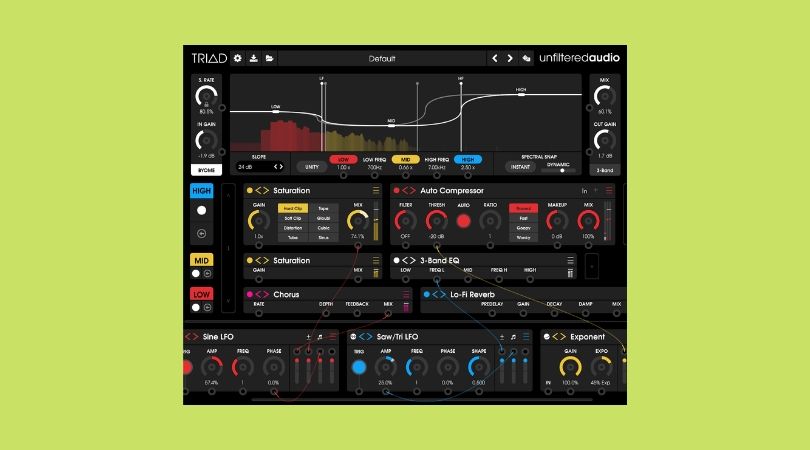 Unfiltered Audio Triad builds on the success of Unfiltered Audio’s award-winning BYOME (Build Your Own Modular Effect) system that combines high-end audio processing with versatile modulation and a ton of effects – all bundled within an incredibly intuitive modular interface.

The plugin adds multi-band capabilities as well as various other interesting parallel, mid-side and stereo processing techniques to the already extensive effects engine.

Unfiltered Audio Triad is capable of 2-Band and 3-Band processing, 2x and 3x parallel alongside mid-side and left-right processing allowing for unmatched versatility of effects processing.

Some unique features in the Audio Triad that are unseen in other multi-band effects plugins is the ability to automatically determine the optimum crossover points for your source material using the spectral snap mode, and the virtual cable system makes the signal routing and modulation capabilities almost endless.

What’s under the hood…

Like I mentioned the the Audio Triad effects library is made up of 40 effects cells which include everything from multi-band compression to frequency-dependent reverb, complex distortions to intricate delays, plus pitch shifting and an array of modulation-based effects.

The plugin comes in various formats – AAX, AU, VST2 and VST3 and within any VST3 compatible plugin host, you have the ability to route individual outputs from the plugin, opening up the multi-band capabilities to almost any other audio plugin in your existing library. Another really cool feature is that they’ve designed it around the ability to load patches from BYOME which is a huge plus for existing BYOME users who need a little bit more control.

Unfiltered Audio Triad is set to retail at USD $299 (Around R4500) however Plugin Alliance are offering an insane introductory price of USD $149 (Around R2200).

For more information check out the Plugin Alliance website here.