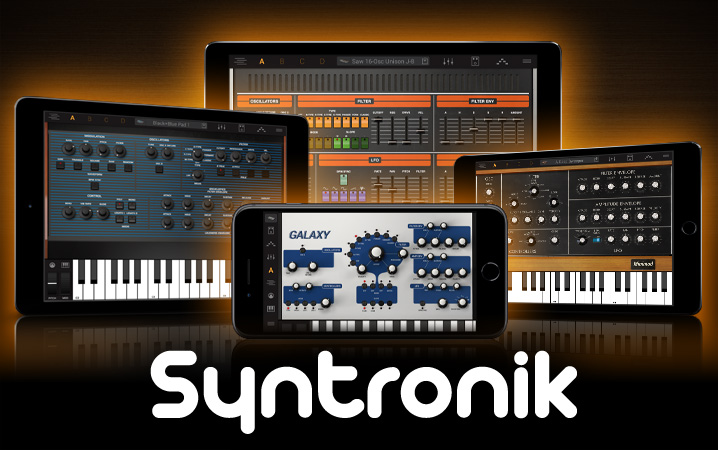 The Syntronik app features emulations based on world renowned brands such as Moog, Roland, Korg, EMS, Dave Smith, Oberheim, Yamaha and PPG. It allows you to create complex patches using up to four layers which can be split or layered to suit your preference. The team at IK Multimedia painstakingly recreated these timeless machines by multisampling 44 different synthesizers and creating a factory bank of over 1600 presets to get you going straight away.

Alongside the multisample engine at the core of Syntronik is IK Multimedia’s “circuit-modelled filters” giving you the ability to further tweak your sound to your heart’s desire. They’ve also included 37 powerful effects, which can be loaded onto your layered sounds, with up to five effects per layer. Everything from dynamics processors, filters, EQs, modulation effects, reverbs and much more.

Each of Syntronik’s four-part layers has a complex arpeggiator loaded in, giving you full control over notes and chords. Each has an independent assignable range and can be saved and recalled at a moment’s notice.

SH-V: Based on two highly stylized two oscillator Roland® monosynths, the SH-5 and SH-2 from Japan, featuring over 3,000 samples.

M-Poly: Based on two iconic Korg® SSM-based signature sounding analog legends, the Mono/Poly and Polysix from Japan, featuring over 1,500 samples.

VCF3: IK’s take on the ultra-rare and often peculiar sounding British tabletop modular, the EMS VCS3 from the UK, featuring over 4,000 samples.

Sadly the mobile app is iOS only…

Android users are going to have to give this one a skip as the mobile version is for iOS only, although it is available as a plugin for PC or Mac. IK Multimedia offer a free version of the software that allows you to upgrade by either buying each instrument as you go or diving straight into the full version. A nifty feature if you just want to casually explore the world of synthesizers before diving in head-first.

The IK Multimedia Syntronik app goes for €10.99 Euro (around R170) to find out more, check out their website