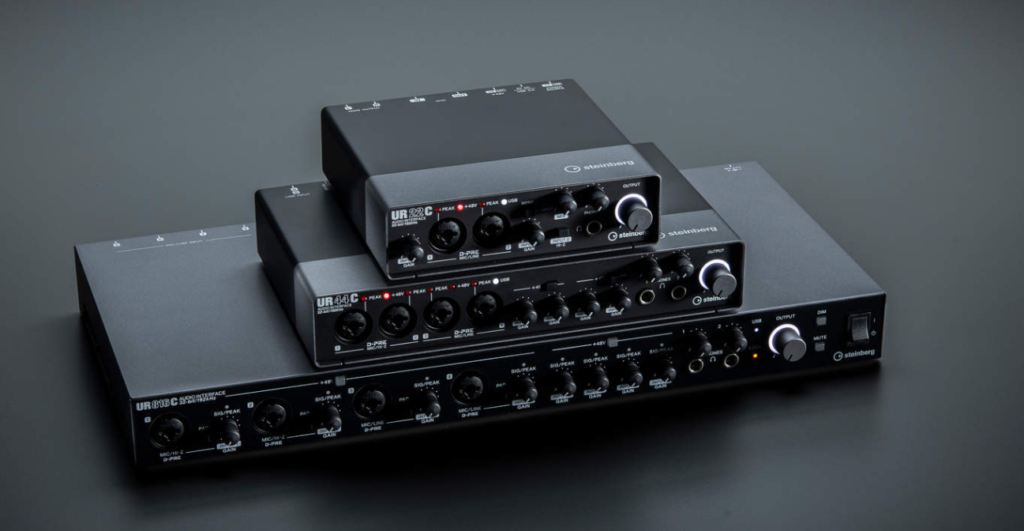 The new Steinberg UR-C series comes in three flavours, the UR22C is a two input and two output audio interface with a clear focus on audio quality and minimal latency.

It’s got MIDI in and out and features internal latency-free DSP effects.

The UR44C expands on the ins and outs, offers four of each and two individually controllable headphone outputs.

“I’m very excited to introduce this new line of audio interfaces. Not only do they offer one of the latest standards in USB connectivity, but also set a very high standard with their 32-bit/192 kHz resolution. Each piece of hardware sounds great, the build quality is simply next level, and the wide range offered covers all demands put into the hardware. Together these interfaces offer a feature set that is without parallel.”  said Steinberg’s Senior Marketing Manager, Stefan Schreiber.

Let’s look at some specs…

All of the new UR-C audio interfaces are built into a rugged metal chassis and they boast 32bit/192khz resolution, D-Pre microphone preamps with 48v phantom power and MIDI I/O. Each interface in the new range ships with an extensive bundle of software, which includes the dspMixFx system which allows you to adjust the interface’s internal DSP settings on-the-fly.

Like we mentioned the interfaces are all cross-compatible, they feature both a USB-C and USB3.0 connection and work on Windows, MacOS and iOS mobile devices.

The new Steinberg UR-C interfaces are retailing at the following prices:

They also offer the UR22C Recording Pack which comes bundled with a condenser microphone and monitoring headphones. The Recording Pack retails for USD $439 (Around R6750 excl. duties).

For more information check out the Steinberg website here.