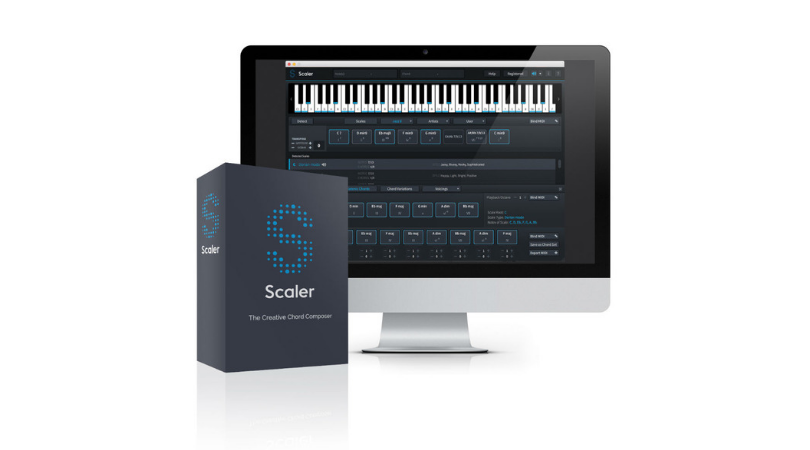 The latest update adds a host of new features that broaden the horizons of what Scaler is capable of, my favourite addition on the new feature-list is the addition of auto-strumming and arpeggiator controls. Now you can make convincing “humanized” patterns with ease. They’ve added a Scale-Lock function which maintains the chosen scale, no matter what parameters you tweak – previously you could sometimes wander outside of a chosen scale without knowing.

Scaler 1.5 sees the addition of a Fretboard style display which you can choose in favour of the existing keyboard layout, this makes it easier for guitarists who may not be as familiar as keyboard enthusiasts to also make the most of the Scaler platform. The Fretboard display was designed in conjunction with Joseph Greer, guitarist of “The Temper Trap” who also created a series of Chord Sets to choose from within Scaler.

What about the more advanced music theory functions?

The 1.5 update adds the ability to edit pre-existing chords or create all-new weird and wonderful chords from scratch, they’ve added an undo/redo function to the Progression Builder section along with the ability to select multiple chords to be dragged into your current progression.

It now has the ability to create instant parallel harmonies, while retaining the scale and quickly find relative chords for your current selection  – very nice features for speeding up workflow in composition.

Whether you’re a music theory novice or seasoned professional, Scaler 1.5 has some very intriguing features for everyone.

The update is free to owners of Scaler, otherwise it’s only USD $49 (Around R725) for new users, check out Plugin Boutique’s website for more details.