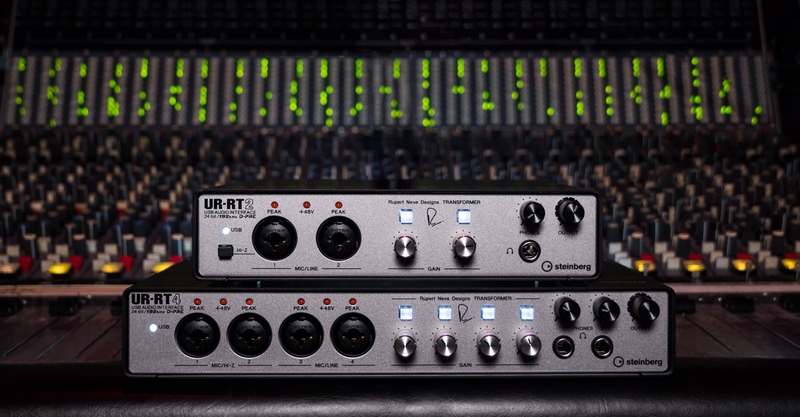 Rupert Neve is a legend in the audio industry, known for creating some of the most iconic preamp circuits. The chances are – a large portion of the instruments and vocals on your favourite albums were recorded through a Rupert Neve transformer at some stage of the recording or mixing process.

Steinberg’s new UR-RT audio interfaces incorporate Rupert Neve’s legendary transformer circuitry and using a front-panel switch – you’re able to choose whether the transformer is included or bypassed in the signal chain. The preamps in the UR-RT series are Yamaha’s D-Pre design, which are known for their high-dynamic response and transparent sound. This adds that extra versatility, as you’re able to choose between Yamaha’s signature transparent sound or Rupert Neve’s signature harmonically-excited and warm sound.

What’s in the line-up?

Both models are also equipped with MIDI in and out and have an overall look-and-feel reminiscent of some of Rupert Neves designs. They both support sample rates of up to 192kHz and are fully controllable via Steinberg’s dspMixFx editor software, which can be run on your laptop or iPad!

The UR-RT2 is set to retail at €399 Euro (Around R6000 excl. duties) and the UR-RT4 – €649 (Around R9700 excl. duties). They are definitely bringing that high-end sound into an affordable package. Both include Cubase AI and a suite of plugins to get you started.

Check out their website for more details on the Steinberg UR-RT audio interfaces.

Steinberg is distributed by Tuerk Music in South Africa, check out their website to find your nearest stockist.