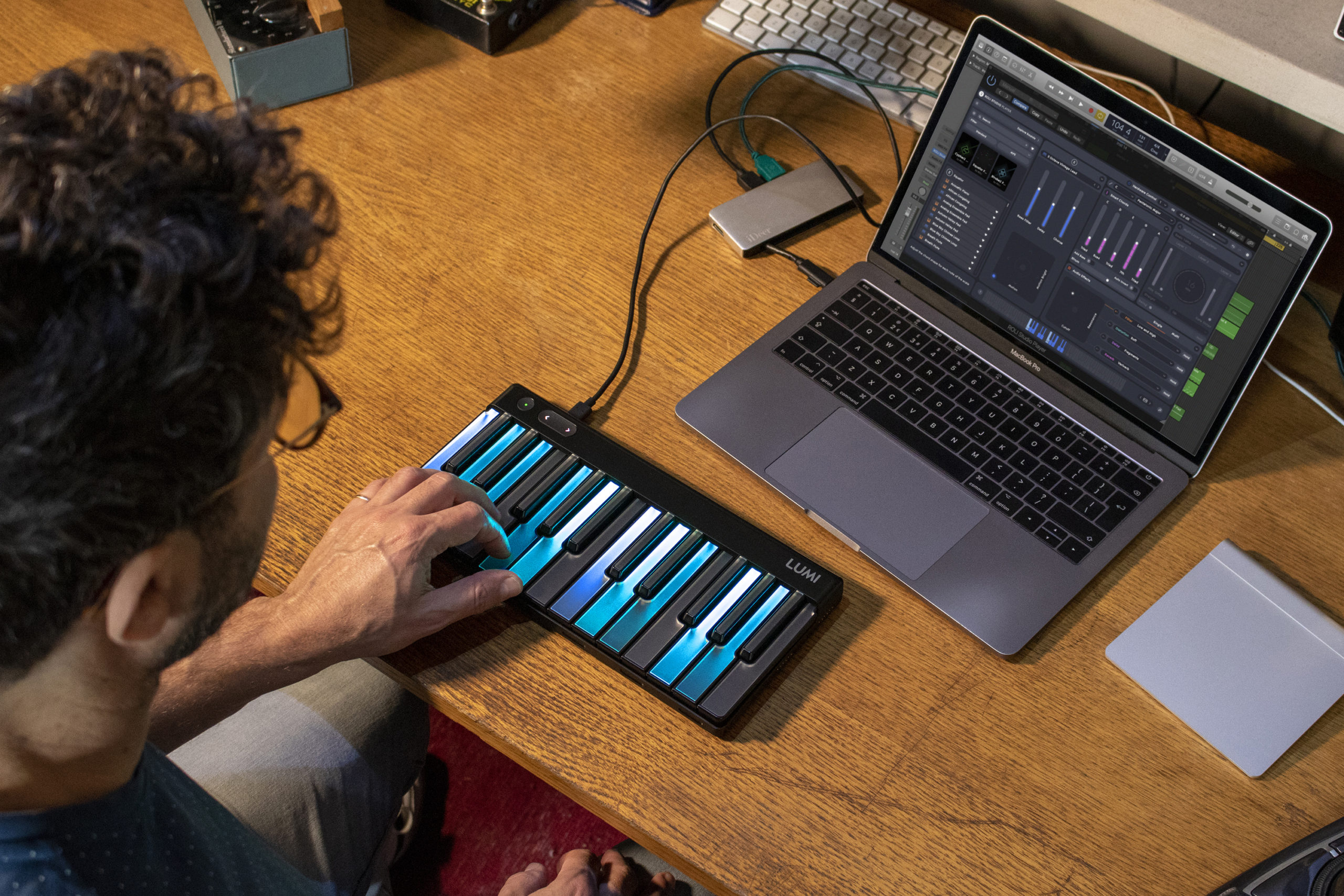 For both producers and performers, the latest edition of ROLI LUMI Keys enters a vastly expanded ecosystem of MPE-optimised tools.

ROLI LUMI Keys Studio Edition is a revolutionary MPE-enabled controller that offers polyphonic pitch-bend and aftertouch per key, as well as new ways to compose with light on illuminated keys.

For the first time music-makers can bend pitch through vibrato-like movements on a keyboard controller with traditional key action, adding expression in a natural and intuitive way.

This innovation comes as many other music-making tools — like Ableton Live 11 and ROLI’s new flagship MPE sound engine Equator2 — optimize for MIDI Polyphonic Expression and make MPE into a fully integrated, mainstream part of digital music production and performance.

The brightest RGB-illuminated keyboard ever made, LUMI Keys introduces light-assisted composition to the music creation process. Light up scales, chords, and arpeggios in any key, through Smart Chords and features in ROLI Studio. By visualizing scales and chords in unfamiliar keys, you can get out of your comfort zone and find inspiration for new ideas.

The underlying technology of LUMI Keys is similar to that of BLOCKS. Connect LUMI Keys (wirelessly or physically) with the Lightpad Block for a mobile music-making setup of unparalleled power. Play on LUMI Keys and control parameters on the Lightpad Block, through their custom integration with ROLI Studio. 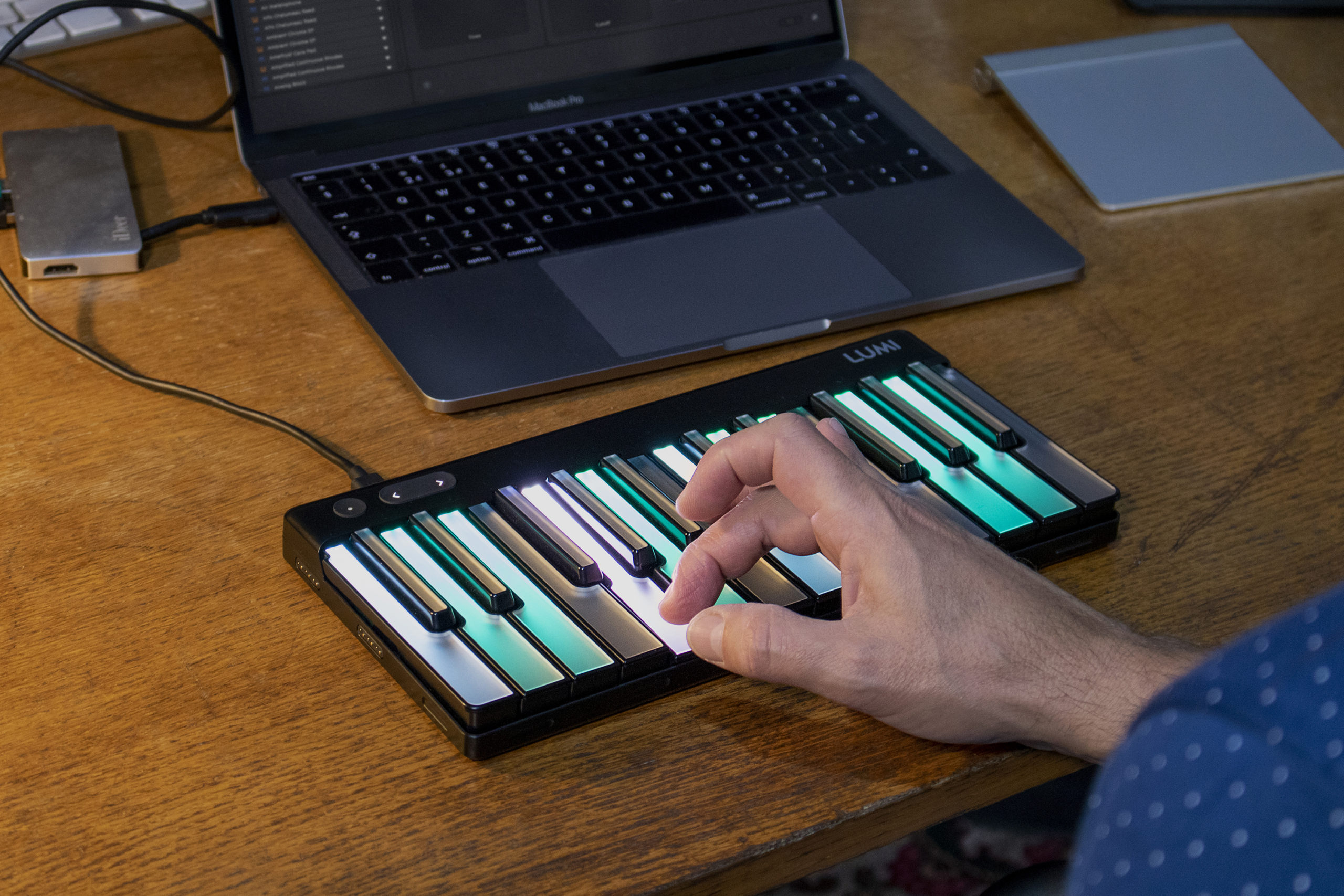 Expand the keyboard in a snap. Through magnetic DNA connectors pioneered for BLOCKS, you can connect two, three, or four keyboards to create a 48, 72, or even 96-key playing surface. Edge-to-edge design, plus integration across hardware, software, and firmware, make multiple LUMIs play as one.

LUMI Keys’ compact size make it supremely versatile, whether it’s on a crowded studio work surface or in a backpack enroute to a session. DS5.5 keys are ⅞ the width of standard keys, making LUMI Keys bigger than a “mini-keys” keyboard but more compact than a standard controller. At 677g its weight is about the same as an iPad Pro.

Four modes let you select the expressive response from LUMI Keys. Piano Mode makes LUMI Keys play like a classic keyboard. Aftertouch Mode adds aftertouch and Pitchbend Mode allows per-key pitchbend, while 4D Mode enables pitchbend and aftertouch together. These modes will be available to all LUMI users after a firmware update in January.

LUMI Keys is also compatible with LUMI Music, an award-winning platform that originated as a Kickstarter project in 2019. The LUMI Music app teaches learners how to play the piano by taking in-app lessons and practicing songs they love.

ROLI LUMI Keys Studio Edition is now available on roli.com in a limited-time launch bundle priced at $269 (£269), a 10% discount from the purchase price of $299. The launch bundle includes ROLI Studio, a LUMI Snapcase, three additional ROLI soundpacks, and a $50 voucher which can be used for any ROLI software, even the newly released Equator2.

The first LUMI Keys Studio Editions will ship in January 2021.