Roland launch their “best TR drum machine yet” – the TR-8S

The refined look is not the only intriguing factor about Roland’s new TR-8S, it packs a host of exciting features. 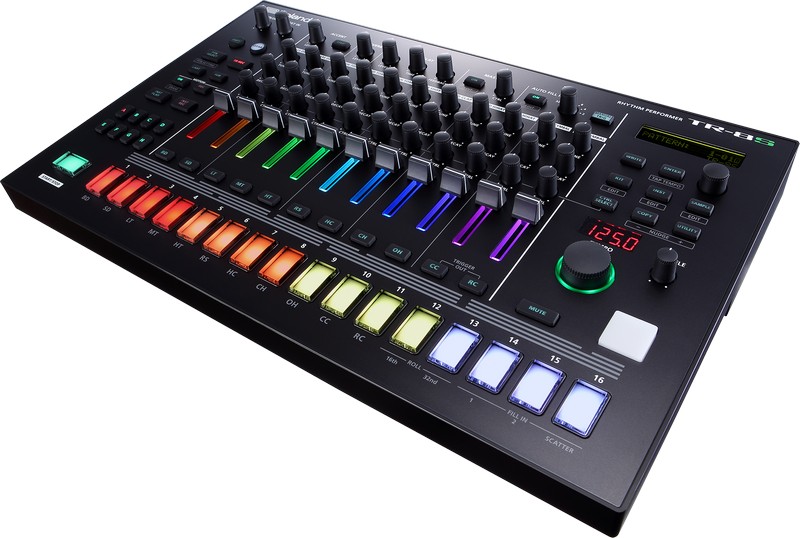 One of the most exciting additions on the Roland TR-8S is the Sample Import function.

It allows you to mix up sounds from the onboard library alongside your own drum samples or synth sounds. The TR-8S also ships with a variety of new sample sounds onboard to get you started right out of the box.

Roland have expanded the list of effects on the new TR-8S from three to over fifteen unique new effects to choose from. The effects are assignable to individual instruments or the master channel, adding much needed flexibility to the internal routing.

In terms of external routing, Roland have added assignable outputs to the TR-8S, bringing the total number of analog outputs to eight. Now you can route individual sounds to a mixing console or external effects, previously one had to use the built-in audio interface as a work-around for this. They’ve also added a trigger output for controlling and sequencing analog gear, while the new audio outputs can also be assigned to be used as triggers, a great feature for the modular synth guys.

“Last Step” is a function for setting each track’s last step before it repeats.

For example, you could have a kick pattern looping around on 16 steps, while the rest of the sounds are following a 12 beat-bar, you could even use odd numbers to really change things up. This is helpful for creating complex polyrhythmic sequences.

“Sub Step” is another new sequencing feature in the TR-8S, it allows you to apply faster rhythm divisions on single steps, to create ratchet patterns.

The Roland TR-8S sees the addition of the new Motion section, this allows you to record automation of any parameters live, as well as sequence the movement per-step.

This is really the cherry on the top, as you no longer need to hook up to a computer to take your arrangements a step further. You’re able to create compelling tracks using just the Roland TR-8S.