Introducing the Rob Papen eXplorer 6 bundle, including 25 plugins with two new additions to the line-up. 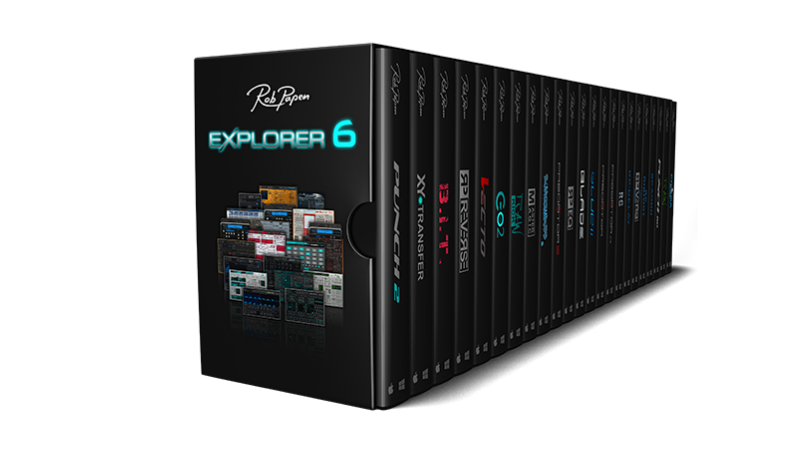 Rob Papen has long been a highly-revered name in the plugin industry, responsible for some incredibly popular plugins such as Predator, BLUE and more.

First up in the new additions to the bundle is XY Transfer – a unique multi-effects processor based around Rob Papen’s very popular X/Y modulation system, with huge sonic capabilities. At the heart of the plugin are three independent effects processors with very flexible routing options.

Each processor features the advanced X/Y modulation system and has five different FX modes to choose from – Filter bank, Comb filter, Shaper, Room and Gater. The X/Y modulation shapes can be drawn in or recorded, triggered via several actions and shifted up or down in speed.

Next up in the Rob Papen eXplorer 6 bundle is the new Punch 2 plugin, featuring a redesigned interface with several new pages.

The new “Main” page offers quick access to all 24 drum pads, with quick controls for each and several essential effects and sequencing parameters.

There is an audition system for quickly previewing the loaded kit without having to dive into the sequencer, the sequencer itself is very vast, it’s got its own window allowing for in-depth control, while the ability to layer the sequences from the main window makes for as very intuitive system for improvising complex rhythms.

The “Master” window features an in-depth mixer for all 24 pads, each channel has aux FX sends and they all run through a master FX section which features an EQ, two filters, compressor, limiter and a mono/stereo tool.

The bundle is set to retail at USD $499 (Around R7400 excl. duties), however, they are currently offering it for an introductory promo price of USD $399 (Around R5900 excl. duties). There are also various offers depending on whether you own a previous version.

For more information check out the Rob Papen website here.