I’m sure those who have been producing music for a while remember ReFX Nexus – Introducing the new ReFX Nexus 3.

The previous two versions were incredibly popular, they didn’t offer any deep synthesis capabilities however the browsing and expansion system offered such a huge variety of options that they quickly became staples for electronic music producers.

A lot has changed in the plugin industry, with a ton of plugins now offering similar all-in-one expansion systems, categorized thoughtfully into genres and styles – one half of ReFX even went on to develop Avenger, which offered a similar browsing and expansion system – with deep synthesis capabilities.

Avenger goes a bit too deep for most newcomers, and I think part of the success of the original series of Nexus plugins was sheer simplicity.

ReFX have definitely echoed that original style with the new plugin, the interface is sleek and the browser is better than ever.

The new ReFX Cloud system automatically syncs your data, so you can use expansions on various of your machines, it also means that they have been able to do away with the eLicenser dongle – which was a nightmare for non-Cubase users.

The core focus of the plugin… 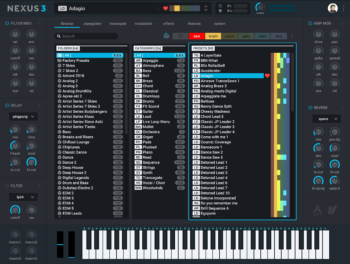 The new ReFX Nexus 3 has a completely redesigned user interface, it’s resizable and everything down to the font size is customizable. The preset browser has also been revamped, this is definitely the core focus of the plugin.

They have expanded the favourites system with a colour palette to categorize presets into different moods and they’ve added macros to quickly jump into the sound and start tweaking.

Everything from the arpeggiator to the effects feature a new interface, the effects display real-time parameters to quickly pinpoint which effect is doing what. The arpeggiator has also been widely expanded to include the ability to create chords and more advanced sequences.

There are other packs that come with a ton of expansions, however, I think the beauty of this system is being able to tailor your own library.

So check out the different expansion packs they have on offer here.