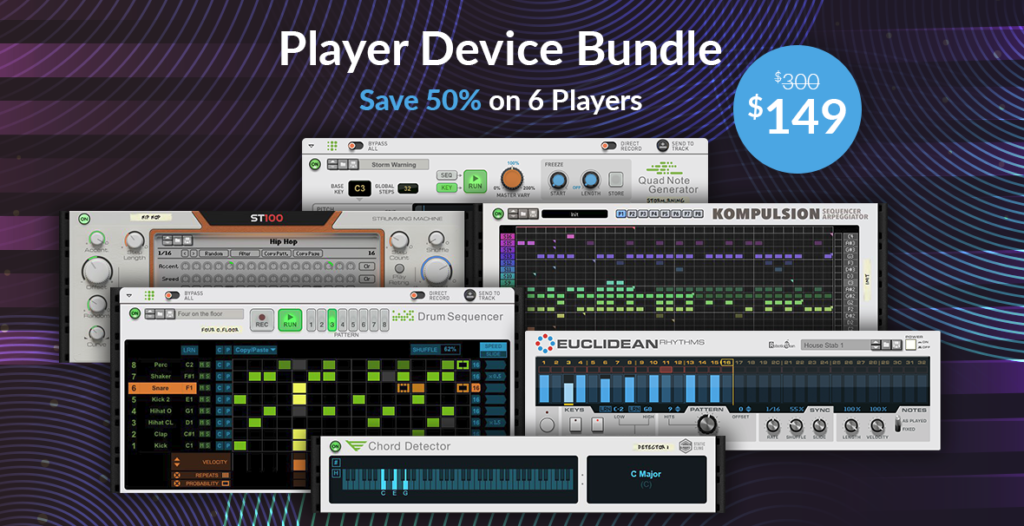 The Propellerhead Player Device Bundle is made up of six devices aimed at helping beginners create more compelling sequences and patterns, they’re also great tools for helping seasoned professionals achieve what they’re looking for much quicker.

Reason’s player devices are designed around a drag-and-drop system, allowing you to simply drag the device into your rack – and it configures everything for you. The new Propellerhead Player Device Bundle is everything you need to sequence, trigger, create chords and more.

First up in the new bundle is “Kompulsion Player”, a complex matrix-style sequencer with adjustable scale to snap to. It’s also got an arp generator for instantly creating a huge variety of arpeggiator patterns. “Euclidean Rhythms” is a 32-step sequencer designed to quickly generate interesting rhythms based on the Euclidean Algorithm (a mathematical function of division).

“Quad Note Generator” is an interesting take on a polyphonic sequencer, with a variety of controls over four independent voices. It’s said to create an endless stream of musical ideas. It has a nifty “freeze” function, that captures a smaller loop within the loop to instantly create new variations.

How much do we save on the bundle deal?

“Drum Sequencer”, “Chord Detector” and “ST100 Strumming Machine” are pretty self-explanatory. Each of the devices come with a variety of presets to get you started straight away – creating complex rhythms, lush chords and catchy melodies with just a few clicks.

If you had to buy each device separately it would set you back over USD $300, however they’re offering the Propellerhead Player Device Bundle for USD $149 (Around R2150), 50% off the total. Keep in mind, these are not regular VST/AU plugins, they’re Reason Rack Extensions – so you’ll need Reason to use them.

For more information check out the Propellerhead website here.