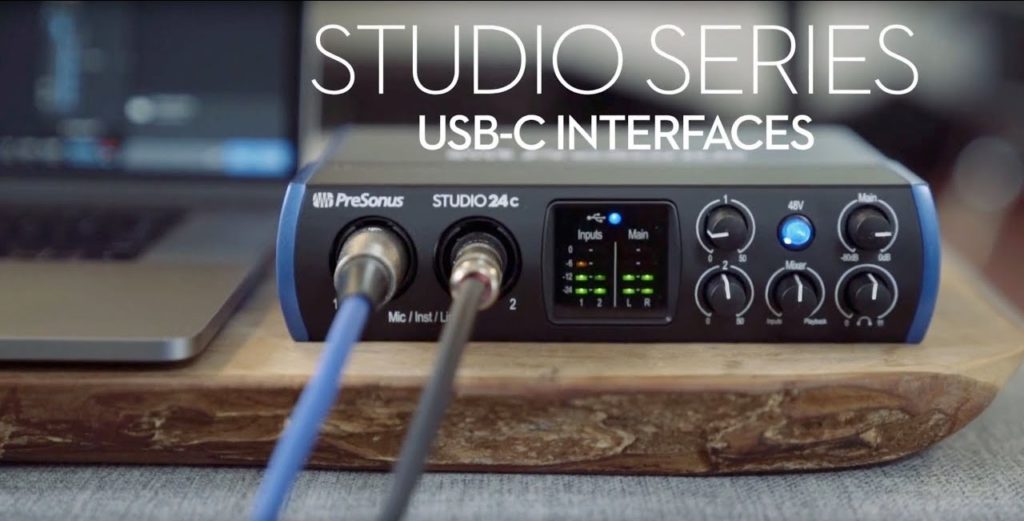 The new PreSonus Studio Series has a solution for almost any application from home recording to professional project studios, each offering the same pristine audio quality and different IO to suit different situations.

The new PreSonus Studio Series interfaces are capable of 24-bit 192kHz audio, and they are fitted with balanced connections and XMAX-L solid state microphone preamps.

First up in the new range of interfaces is the PreSonus Studio 24c which is great for home recording, mobile musicians, guitarists, podcasters, and live streaming. It’s got two inputs and two main outputs and a headphone out with volume control.

Next up is the PreSonus Studio 26c – It’s got two inputs and four main outputs making it perfect for DJs, mobile musicians, and electronic musicians.

This one is great for small bands, producers, and small studios.

PreSonus Studio 1810c is for bigger applications, it’s got four preamp inputs and four line inputs plus an additional eight inputs of ADAT.

In terms of output, you’ve got four main outs and two independent headphone channels. The PreSonus Studio 1810c is perfect for producers and small bands who want to record from a wide range of sources.

The PreSonus Studio 1824c has eight preamp inputs and a further eight inputs of ADAT. There are eight line outputs, an additional main output and two independent headphone outputs. The unit is also kitted out with ADAT outputs for chaining up multiple interfaces.

The recommended retail pricing is as follows: