Pioneer XDJ-1000 has been announced and the big news of course is that there is no CD drive on this media player. It is a USB-only device.

This means there are two ways one would use the Pioneer XDJ-1000. Either with a USB flash drive in conjunction with Rekordbox. Or as a media controller with Traktor or Serato.

Many DJs now simply plug their laptop into the CDJ900Nexus and then drag the tracks onto the device. The same would apply here, so it’s not confined to just USB flash drives.

What is the significance of the Pioneer XDJ-1000

Well for one it is yet another nail in the coffin of the CDJ DJ.

After the recent release of the Traktor Kontrol S8 which has no jog-wheels or tempo sliders, the announcement of the Pioneer XDJ-1000, whilst not exactly a similar device to the Kontrol S8, certainly shifts the mindset of a lot of DJs.

One would also expect the Pioneer XDJ-1000 to be somewhat cheaper than the current CDJ900Nexus or CDJ2000 models, since all that extra under-carriage is gone. 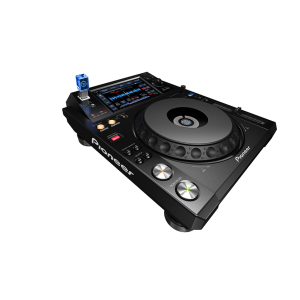