The new Pioneer DDJ-400 is aimed at beginners getting started and professionals looking for a more compact solution. 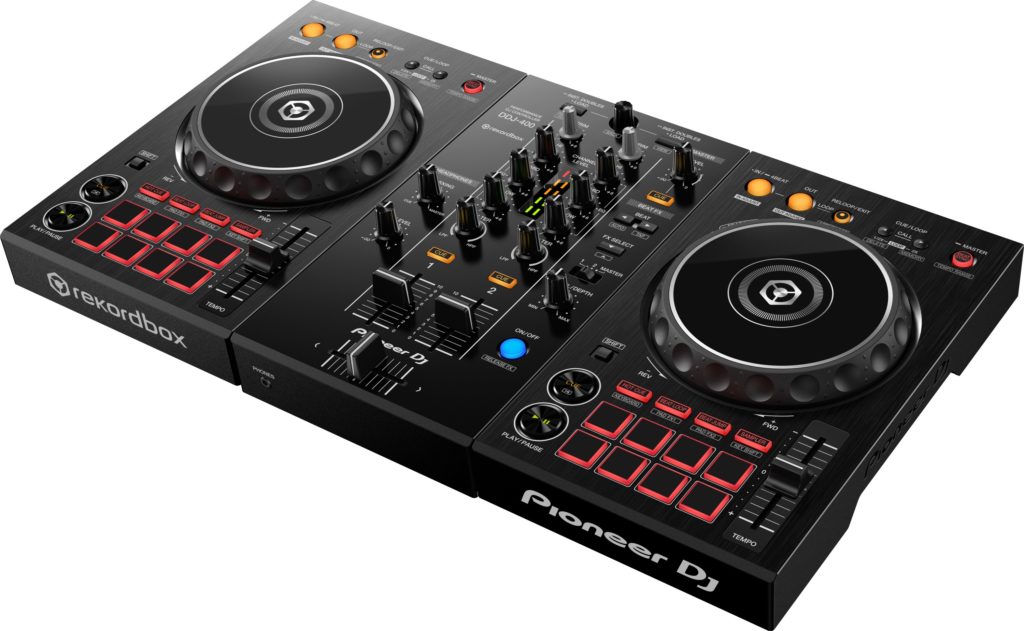 The core concept behind Pioneer’s new DJ controller is mastering the basics, from the jog-wheels to the build and layout – the look and feel closely mimics that of Pioneer’s flagship controllers, players and mixers. The Pioneer DDJ-400 builds on its predecessor, the DDJ-RB, by adding some key features from their flagship models, along with some intuitive interactive setup and configuration pop-ups.

The software also talks you through the basics of mixing, this is great for people who are diving into mixing for the first time.

The layout of the Pioneer DDJ-400 is designed to feel like three separate units, two decks and a mixer. This is great for beginners who want to practice on something that mirrors the layout of what they will see in the DJ booth at your average nightclub. The mixer section features similar Beat FX as seen on the Pioneer Nexus mixers, and it’s laid out in the same configuration as every DJM mixer to date. The jog-wheels also feel almost identical, apart from size, to that of the Pioneer Nexus series players.

No more “Plug and Pray”

The new Pioneer DDJ-400 is fully USB class-compliant, that means that no additional drivers are needed to use your controller, and no extra software to configure or go haywire. This is also great for users who don’t necessarily want to use the included Rekordbox software, or those who want to configure their own custom mappings. The class-compliancy also means that the Pioneer DDJ-400 can be used alongside an iOS or any MIDI compatible device.

Pioneer have also added a nifty feature, allowing you to send the audio output from your controller, through your laptop speakers (something that has always proved tricky with previous controllers).

This is awesome for the DJs who busted their budget on the controller, and are still saving for some decent speakers – allowing you to start practicing straight away!

The Pioneer DDJ-400 is set to retail at USD $259 (Around R3600 excluding duties) which is insanely well-priced, considering the array of professional features!