We speculated on the Logic Pro X update being 10.5, but it seems they’ve made it 10.4.5 although with a huge feature list, befitting of a jump to 10.5 in our opinion. 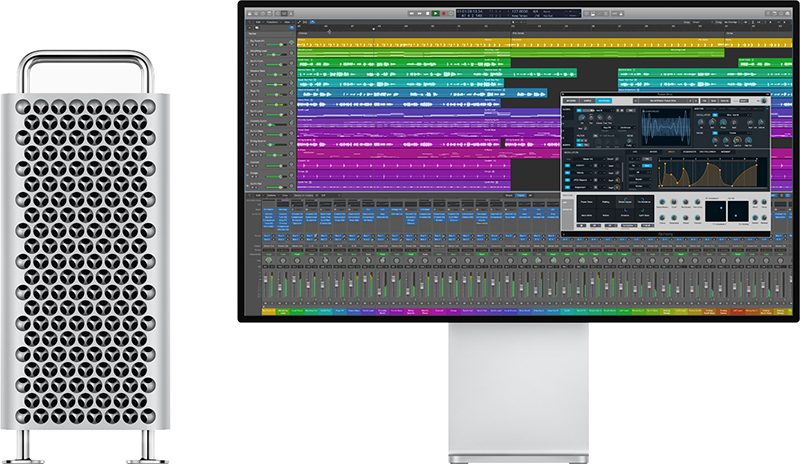 They left a large amount of information in the dark and focused on a major overhaul of the GUI and the compatibility with their new Apple Mac Pro desktop computers – as that was the highlight of the event.

Well, the Logic Pro X update to 10.4.5 is officially here and Apple have announced the official list of new features, bug-fixes and enhancements.

At the top of the list is a feature announced at the conference, and that’s the huge increase in maximum track capabilities.

You now have the ability to create up to 1000 instrument channels and 1000 audio channels and more. Including all send/returns and other channels, the theoretical limit is 16000 tracks in a project – that’s mental.

Logic Pro X 10.4.5 features a new De-Esser 2 plugin that greatly increases the usability of the existing plugin. They’ve redesigned it to work on a lot more than just vocals.

Logic Pro X 10.4.5 has a new dynamic plugin load feature, allowing for much quicker project load times because the software automatically detects which channels are actually needed, due to audio or MIDI data being present on those channels.

This is great for those users who have big templates, but don’t use all the instruments at a given moment.

They’ve also added various workflow improvements such as the ability to create your own default layouts for the mixer amongst others.

Also new is are more advanced settings to the MIDI clock capabilities; now you can set up time offsets and delay compensation.

Another big feature is the fact that freezing tracks now releases all the plugins from your computer’s resources, offering a much more fluid workflow in larger projects.

For more information on the new Logic Pro X update  check out the full new feature list at Macprovideo.com here.

How is this real.

AND @solis4evr IS THE COVER!! Why haven’t you listened yet?
https://open.spotify.com/playlist/3Dku0CgmRcWBweI8lmrxlW?si=lyJIpsEmSAOJkMWcCu0faA&dl_branch=1

It's time for Class G.O.A.T on #YMornings🏆

Here's a deal for you: Vodacom NXT LVL is making it easy for you to keep your mind on things that matter with their best value 1GB bundles from as little as R19. Register for NXT LVL on the MyVodacom App.

@Tuliodna I'm afraid this wave is entrenched across the country and spreading across all provinces now 👇
Need to slow down and limit the spread, monitor hospitals, beds and oxygen capacity now 4

Jay-Z’s made in America Festival lineup, that’s happening in September, is already giving us FOMO😭🇺🇸