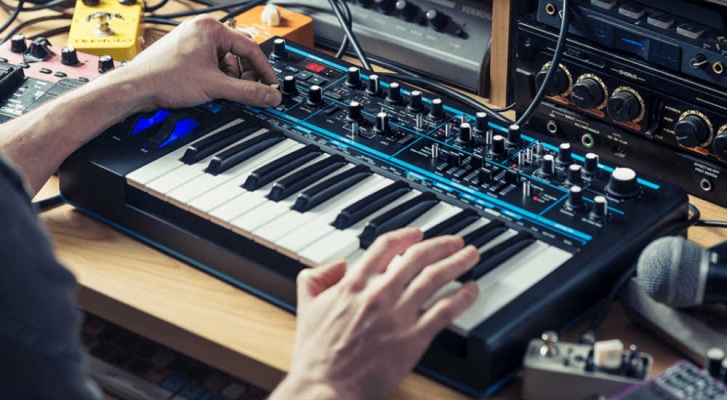 Novation have added a variety of new features in the new update, most notable of which is their collaboration with Richard D. James aka Aphex Twin – AFX Mode.

In essence the new AFX Mode introduces the ability to assign a unique sound for each of the 25 keys on the Novation Bass Station II. This turns the synth into an analog drum machine or random sound generator. AFX Mode gives you eight overlay tables to save and recall, and when combined with Novation Bass Station II’s already incredibly advanced arpeggiator and sequencer – the results are truly magical. The built-in sequencer in the synth allows you to record sequences in on a per-note basis, so if you’ve created some drum sounds you can quickly sequence them using the existing sequencer in the Bass Station II. Furthermore, you can send MIDI from an external controller to layer an oscillator over the sequence you’ve already created.

Some of the other new features in the new firmware update…

The latest Novation Bass Station II firmware update also introduces the ability to control the sub oscillator independently, where previously it was latched to the pitch of Osc 1. This turns the synth into a fully-fledged three oscillator synth, you can create traditionally monophonic sounds, chords and much more.

Another great new feature is Glide Diverge, which allows you to vary the glide time of the main oscillators which is a really cool effect. Novation have also added the ability to create fixed envelope durations per-key, which goes hand-in-hand with the new AFX Mode.

The firmware update is available to all Novation Bass Station II owners, you can update by visiting the Novation Components web app here.