Audio Damage Enso is an advanced looping effect processor, capable of everything from experimental tape techniques to traditional overdubbing. 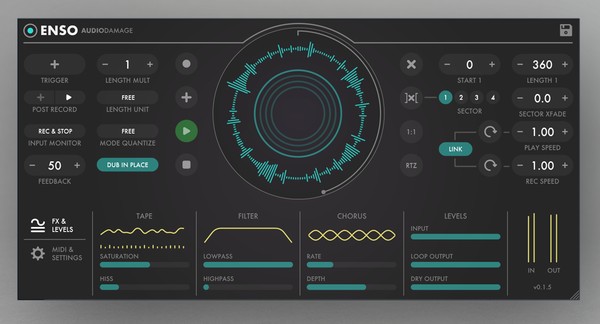 At the heart of Audio Damage Enso is an incredibly vast looping engine with four distinct modes. What sets this plugin apart from most looping plugins, is the fact that you can change modes using a trigger function, and even set-up a chain of events to react to that trigger input. The trigger input is MIDI assignable, so essentially you can set it up to record, overdub and then play by using a single footswitch or MIDI assignable button. You also have the ability to quantize the trigger input to your DAW’s grid and you can quickly create quantized loops with one-button-looping.

This plugin is great for traditional looping artists, however where Audio Damage Enso really shines is the “Dub-in-Place” setting.

With this turned off, it allows you to run your recorded loop through the internal effects and record it back into the loop. This is akin to setting up two tape decks in a feedback loop with various effects processors in the chain, similar to what early Ambient artists like Brian Eno and Robert Fripp were doing.

At the centre of Audio Damage Enso’s user interface is a circular waveform display, this circle is split up into four sectors with variable size controls. This allows you trigger to jump between sectors using a MIDI parameter, or set up a chain of sectors, with crossfade in between them – this is great for creating ambient loops and soundscapes.

Another feature that makes Audio Damage Enso awesome is the individual control over the record and play head speeds. You can record at regular speed and playback at half speed for that lo-fi slow effect, or vice-versa for pitched up tape effects. You also have the ability to set the speed all the way into the negative range, so you can record backward and playback forward – for weird experimental effects.

Audio Damage Enso is currently set at an introductory price of USD $59 (Around R900), it’s available as VST, AU and AAX for more information check out their website here.