The tagline for the new Modal Skulpt compact polyphonic synthesizer is “Bigger on the inside” and they captured the essence. 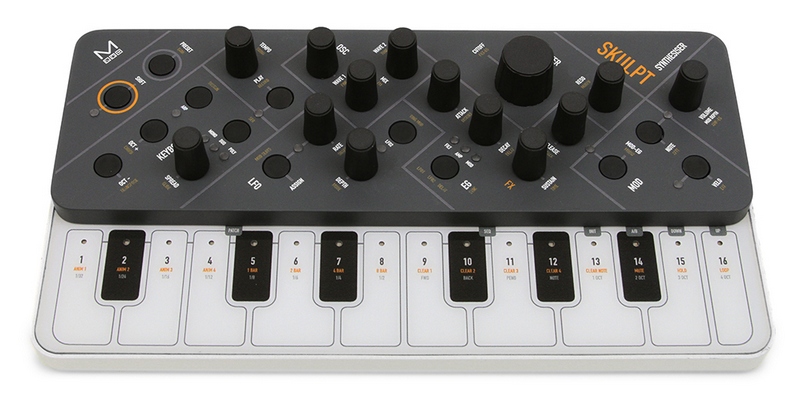 Modal Electronics first made a name for themselves with the release of their flagship synthesizer, the 002, a 12-voice polyphonic synthesizer, with a five-octave keyboard and fully featured front panel. The new Modal Skulpt aims to pack a large amount of the legendary features from its predecessors into a super compact and lightweight powerhouse. It’s safe to say that Modal spared no expense with the development of this synthesizer, everything from the unique layout and sleek aesthetic to the powerful capabilities and raw tone.

At the heart of the Modal Skulpt are eight virtual analog oscillators for each of the four voices. Each oscillator features morphable wavetables, ring and frequency modulation and PWM. Furthermore, the synthesizer features an advanced modulation matrix – offering eight assignable slots, with eight sources and up to 37 destinations to choose from!

The Modal Skulpt incorporates a 2-pole state variable filter, for those who don’t know, that means that you’re not limited to a choice of two or three filter shapes, you have the ability to morph between various configurations!

At under USD $300 you would expect the features to stop there, you’re wrong…

The new Modal Skulpt synth packs in some noteworthy effects, from a clock-synced delay to waveshaping distortion. Furthermore, it has three envelope generators – Amp, Filter and Mod, alongside 2 LFOs which can be synced to an audio rate or MIDI signal.

We’re not done yet! Modal’s new little BEAST incorporates a real-time sequencer able to hold up to 128 notes of data and 4 layers of parameter automation, alongside an intuitive arpeggiator for quickly dialling simple melodies.

The synth comes packed with 128 patches and 64 preloaded sequences, and best of all it ships with a full software editor, not just for patches but for FULL control over your synth! It’s powered either via batteries or a power supply, did we mention how compact and lightweight it is?

It’s expected to retail at USD $300 (Around R4100 excl. duties), this is a definite on my ever-growing list of synthesizer wants!