This Saturday Paul Bothner hosts SA Looping Champion and all round music tech whizkid – Sean Ou Tim aka Mr. Sakitumi who will be demonstrating how he plays electronic music live in an aptly titled Live Electro and Tech Workshop.

What you will learn:

Sean will focus on electronic music production and how to best take this into a live arena with the use of midi controllers to perform with, how he sets himself up and will impart some new ideas he has developed from his experience as a live electronic music performer. 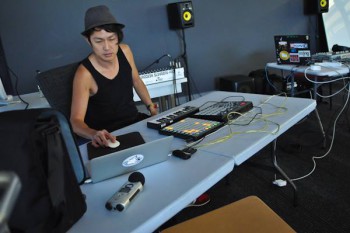 Sean is a multi-instrumentalist who has performed with various top South African bands and artists such as Lark, Godessa, Closet Snare and many others. He is often the ‘go-to’ guy many artists call on when they need a drummer, keyboardist, bass player, guitarist or electronic programmer for shows and tours such is his versatility and ability. He also prodcues his own music as Mr. Sakitumi and has released an album and several EPs. His live show with partner, The Grrrl includes video mapping and is more than just music performance. He also won the inaugural Boss Looping Championships in South Africa in 2013.

Sean has performed internationally and also hosted workshops in Berlin, Germany, as well as South Africa and is without a doubt one of the most skilled and knowledgeable musicians around. If you ask him nicely, he could even show you how to make music on a iPhone.

Sean is also one of only 4 Certified Ableton Trainers in South Africa.

Paul Bothner have a whole series of workshops as part of their Music Technology Masterclass Series being hosted at their branches over the next month. Go to their website to get the full list.