Vocal synthesis is another technique used widely in contemporary genres everywhere and iZotope is set to knock it out the park again with VocalSynth 2.

Up until the release of iZotope VocalSynth, no plugins on the market were as all-encompassing – housing the ability to create a wide variety of vocal synthesis types.

iZotope is about to knock it out the park once again with their updated VocalSynth 2, adding a new module, Biovox, to the already wide line-up. Biovox is designed to model the physical characteristics of the human vocal tract, giving you the ability to change parameters such as nasality, vowel shapes and formants.

VocalSynth 2 also adds to the host of available effects modules available – new Chorus and Ring Mod modules alongside improvements to the “Shred” distortion module can now be found alongside the filter, transform and delay effect modules. VocalSynth 2 also gives you the ability to drag-and-drop modules to change the signal-flow.

So what makes up the sound of iZotope’s VocalSynth? 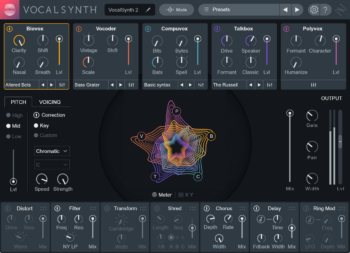 Polyvox is a complex harmonizer, allowing you to change formant sounds per voice, giving you the ability to create wide choir effects. Compuvox uses a digital algorithm to recreate the audio using various parameters, think of a “speak & spell”. Then there are a Vocoder and Talkbox module which are pretty widely used styles of vocal synthesis. VocalSynth 2 also includes pitch correction and various other handy features for vocal processing and a very visually pleasing GUI with an intuitive waveform display.