IK Multimedia UNO – a dive into the analog synthesizer limelight

The IK Multimedia UNO sees the company proudly announce their first steps into the world of affordable analog synthesizers. 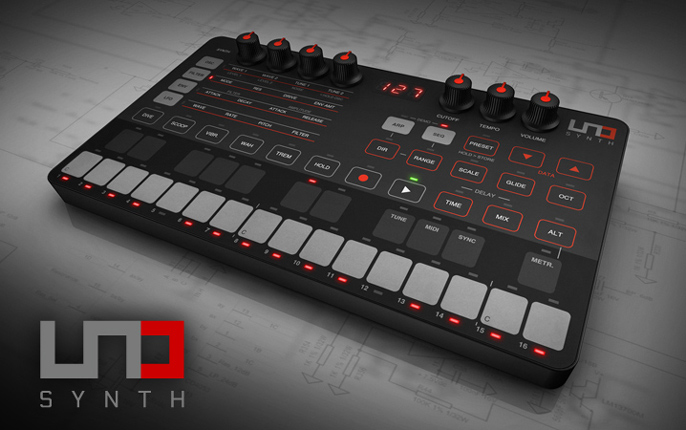 IK Multimedia’s legendary Erik Norlander (one of the key players behind the iconic Alesis Andromeda) has teamed up with the modular synthesizer manufacturers, Soundmachines, to introduce their ground-breaking new synthesizer.

The power of the UNO lies in the incredibly flexible bank of parameters, allowing a huge amount of tweakability within a small form-factor. Up to 19 parameters can easily be adjusted by using only four knobs, with an additional 3 knobs assigned to the parameters you would probably use the most – Filter Cut-off, Volume and Tempo.

Under the hood of IK Multimedia’s new UNO synth is an all analog signal path, featuring 2 VCOs, a noise generator, a multimode VCF and a VCA. The VCF is a 2-pole filter featuring various modes such as Low Pass, High Pass and Band Pass. Before the filter is a custom-designed, dual-stage overdrive circuit that adds beefy saturation which can then be shaped by the filter.

The IK Multimedia UNO also features an LFO with a plethora of shapes to modulate your sound in all sorts of interesting ways.

UNO features an intuitive multi-touch 27-key chromatic keyboard that can be tuned to one of 13 different scales. You’re able to trigger simple arpeggiators or record in more complex sequencers on a per-note basis.

IK Multimedia have also included a host of effects into the UNO – Dive, Scoop, Vibrato, Wah, Tremolo and a delay with some parameters to get the most out of it. The UNO is packed with 100 presets to use from the get-go, and the incredibly intuitive-layout and easy-to- use parameters makes it the perfect synthesizer for beginners! It’s super lightweight (only 400g) and can be powered by AA batteries or USB.

IK Multimedia’s UNO synthesizer retails for under USD $200 (Around R2600), easily the most affordable analog synth (with a host of usable parameters) on the market.

Check out the IK Multimedia Uno on their website.

IK Multimedia is distributed by Tuerk Music in South Africa, visit their website to find your nearest
stockist.