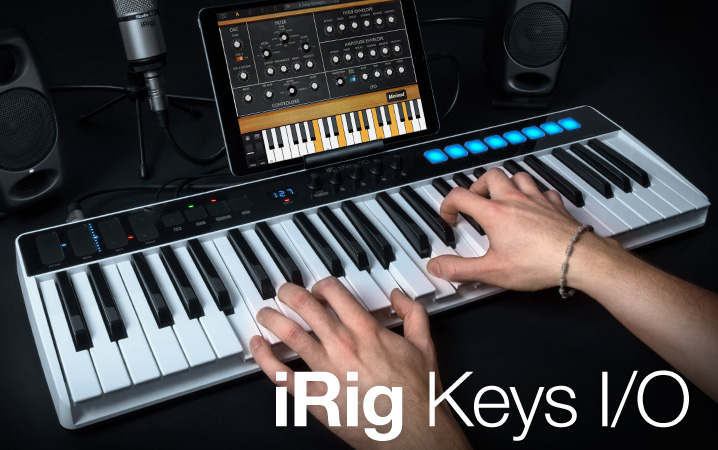 The iRig Keys I/O is a MIDI controller keyboard at heart that comes in 2 models, 25-key and 49-key versions. IK Multimedia have incorporated capacitive touch-strip controllers with LED feedback to control your pitch and modulation wheels alongside four rotary encoders which double up to control up to eight assignable parameters.

Furthermore, eight velocity sensitive pads can be found on the iRig Keys I/O, each housing multi-colour LEDs for visual feedback.

For ultimate mobility, the iRig Keys I/O can even be battery powered.

More than just a MIDI controller

Housed inside the iRig Keys I/O is a 24-bit/96kHz audio interface alongside a phantom-powered Class A microphone preamp. This allows you to record with almost any microphone, on the road or in the studio! Having everything in one unit means convenience, being able to plug your entire studio in with one cable or transport it around.

IK Multimedia iRig Keys I/O ships with a bundle of software including SampleTank 3, T-Racks, Ableton Live Lite and more – Over USD$500 worth of software to be exact.

The iRig Keys I/O retails at USD$299 (Approx. R3600 excl. duties) which is tempting considering all the features and software included in the package!

Let’s have a look at the specs:

IK Multimedia is distributed by Tuerk Music in South Africa.