You are here: Home / Tech Corner / Tech & Gear News / How big is the Electronic music industry?

How big is the Electronic music industry?

How big is the Electronic music industry?  7 billion dollars big if recent reports are anything to go by.

The global electronic music industry, according to an IMS business report, has been valued at a jaw dropping $6.9 billion a year industry in 2014.

This business report is the result of painstakingly compiled findings regarding the dance music industry and its various offshoots. It was presented last week at the IMS Summit in Ibiza and the tally of a $7 billion electronic music industry is most certainly a brow raiser.

The biggest slice of that fat figure comes from the live music sector of the scene such as festivals and clubs with a whopping $ 2 billion just from North America alone!  An area where the growth continues to taper off and slow down is of course, record sales.

While the figures are impressive, when compared to those of 2013, the growth from then to 2014 was a mere 12% higher than before. This could indicate a possible deceleration of a now very saturated scene. 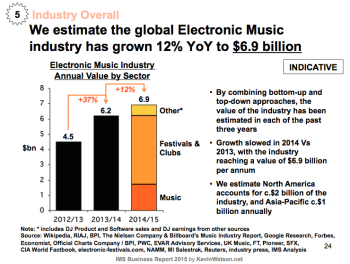 The IMS report of the $7 Billion Electronic music industry also covers the yearly earnings of some of the industry’s top earning DJs.

The salaries of DJs across the board have started to settle and shrink, incomes in the top tier grew only by 12% in 2013 while in 2012 those same salaries grew by 37%.

What is also noted in this year’s report is the attention given to emerging markets like India, East Asia, and even our very own South Africa. Apparently each territory’s electronic music industry benefits from investments by Europeans and North Americans.

As a compilation of data from credible such as Nielsen, Forbes and other various sources, the IMS Business Report is a great resource for statistical information about the business aspect of electronic music.

What will 2015 mean for the finances of the electronic music industry, and will the continued mainstreaming of the scene rinse out all authenticity until it becomes tired and worn out enough to lose all edge? Who knows, growth is always a double edged sword.

What is done with the growth by the most influential of those industry largely tends to determine where the mainstream wash will go.