You are here: Home / Tech Corner / Tech & Gear News / GoDJ Plus is an all-in-one DJ system

GoDJ Plus is an all-in-one DJ system 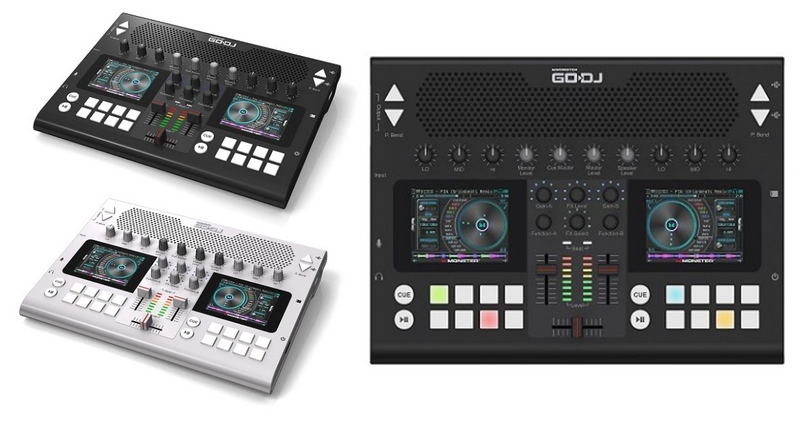 GoDJ Plus has just been launched as a crowd-funding campaign on Indiegogo so this is more of a prototype than a finished product yet, but it certainly is something the consumer DJ market would get excited about.

This all-in-one DJ system has a two-channel mixer including crossfader, 3 band EQ and effects for each deck plus performance pads. Each deck also includes a touchscreen and it houses a pair of speakers at the top.

There are also a set of RCA outputs, a headphone jack and a mic input.

Monster, the guys who did the Beats By Dre headphones are behind this.

The GoDJ Plus has 4 gigabytes of internal memory but also has an SD card option to store your music on. It’s not a 100% brand new device but the Plus version is the first with full size controls and the built-in speakers. The internal battery they say will give you 12 hours of continuous playback, which is pretty impressive considering the two screens.

For home use, taking with you on holidays or for whipping out at a little dinner party etc, the GoDJ Plus is pretty cool and it is nice and compact; one could easily pop it in a backpack and the bonus is – no laptop required!

Of course with the RCA outputs you could connect these to a set of powered speakers anywhere too and get your jam on.

GoDJ Plus is cool and the built-in speakers make it just that bit of a nicer option than an iPad and Traktor DJ for those weekends away when you still want to jam some beats.

Watch the GoDJ Plus video here.