FactorSynth is a new Max For Live device that uses machine learning algorithms to decompose sounds and then re-compose them. 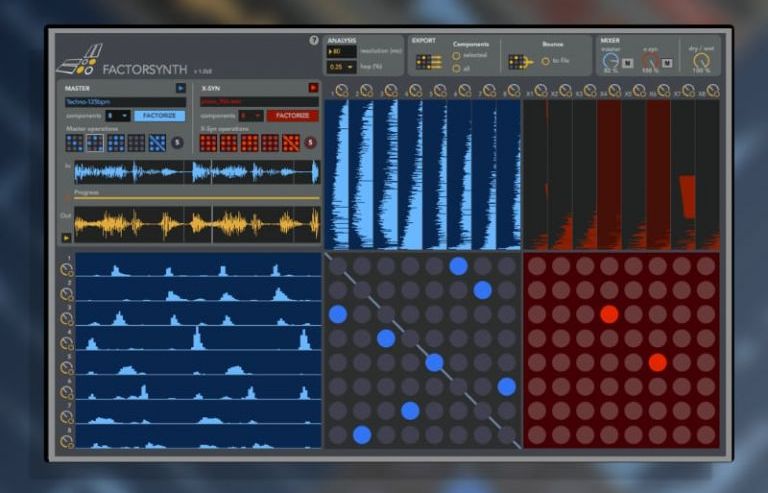 FactorSynth aims to bring new life to your samples and loops, once you’ve loaded your sounds into the device, you’re able to modify and rearrange them from small adjustments like removing notes or randomizing the sequence to creating completely unique textures. Load up a host of sounds into FactorSynth and allow the system to decompose the sound into its raw elements, the analysis process is called “factorization” because it utilizes a technique called Matrix Factorization.

FactorSynth creates all-new ways of approaching remixes or live resampling of pre-recorded material. Using the machine learning algorithm, you’re able to perform cross-synthesis between two audio elements, and sequence when the cross-synthesis algorithm fires off. It’s a particularly nifty tool for working with drum loops, as you can easily remove elements or recreate a different sequence on-the-fly or use cross-synthesis between a drumbeat and another sound source such as a pad to create a new rhythmic pad sound.

How do I get FactorSynth up and running in my DAW?

FactorSynth is a Max For Live device, meaning it’s only available to Ableton users which is a bit of a let-down for me, a Cubase user, as I have been looking for a tool with this sort of capability. Another big thing to note, it is only available for Mac OSX, and we are unsure of a Windows release in the future.

Stay tuned to Isontonik Studios to find out more.

The plugin is not cheap for a Max For Live device, however it poses itself as a completely unique music production tool, something that I think any sample-fundi would embrace with open arms. The device goes for EUR 60 (Around R1000).