Erica Synths SYNTRX is the modern re-imagining of the legendary EMS Synthi AKS, used by Pink Floyd and others. 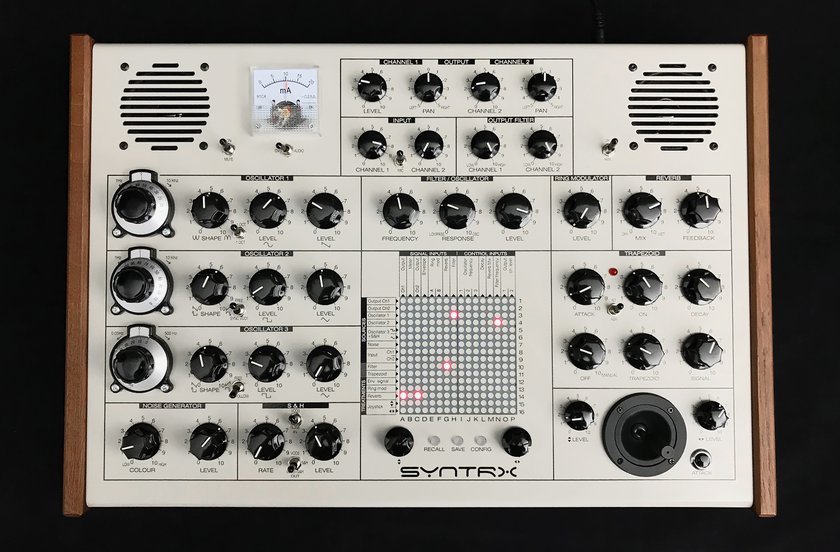 For the first time, a compact synthesizer offered almost the same level of intricacy as their much larger modular counterparts of the time.

The synth was about the size of a suitcase, which made it incredibly popular for touring bands. It quickly became known for the incredibly experimental sounds it could create and became an intrinsic part of Brian Eno’s ambient sound.

To my knowledge, we have yet to see a commercial hardware recreation of anything remotely based on the EMS Synthi AKS – although Behringer did hint at it, there are a few clear differences with Erica Synths latest offering.

Introducing the Erica Synths SYNTRX inspired by the experimental nature of the EMS Synthi AKS, but introducing a variety of unique features.

Arguably the key feature of the Synthi is its pin-matrix system, the new SYNTRX takes inspiration from this but takes it to a whole new level. The matrix is a digitally controlled mixer, each cell has various gain levels including a bypass and the entire state can be saved and recalled.

Even more experimental than before…

The EMS Synthi AKS is often credited as being one of the most experimental hardware synths ever built, and what better company to create their take on such an experimental beast as Erica Synths who are known for some rather experimental offerings.

The Erica Synths SYNTRX is a collaboration between Erica Synths and the engineers at the Riga Technical University. It has most of the key features that made the original Synthi special, three oscillators, a ring modulator, self-oscillating filter and spring reverb.

The designers have added a sample & hold module for adding random voltages to your patch.

The SYNTRX will be produced as part of a limited run and will retail for EUR 2500 excl. vat (Over R40k excl. duties).

For more information check out the Erica Synth website here.