DJ QBert and his 2-Dimensional DJ Deck  – Check it out! 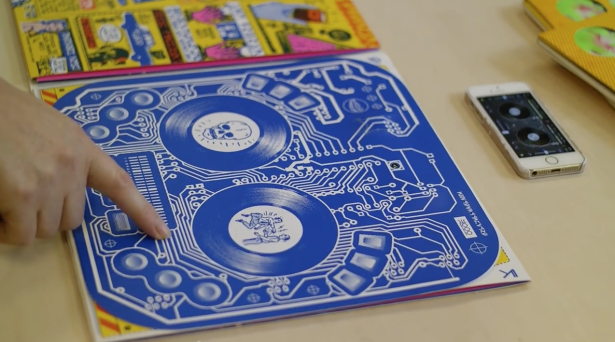 Dj QBert. Gotta love the guy! Say hello to his 2-Dimensional DJ Deck, which if you are a minimalist is something you might get a kick out of.

The traditional three dimensional DJ deck has been suped up into a version that could fit into an album sleeve.

The project has been successfully funded on KickStarter no less, and the campaign has raked in one hundred and twenty eight thousand dollars of the original one hundred thousand dollars mark. With these numbers it’s safe to say that people were intrigued by the idea and had faith that the 2-D deck would be a treat for DJs aspiring and accomplished alike.

The final result sees DJ QBert and the company that makes DJ Software having manufactured a 2-Dimensional DJ deck, or should we say a ‘DJ sheet’.

Two other tech smart companies have come together to collaborate on the making of the full product, such as Novalia, a company that makes interactive paper, and Algoriddim the founder of the DJ app.

QBert has worked on an inventive album cover that doubles as a Bluetooth powered DJ controller, because you know, DJ-ing wasn’t quite simple enough as is. You will be able to use this as DJ controller when partnered with your smartphone.

It’s purposefully gimmick-y in this way and will more than likely grab loads of attention in the world of DJ-ing, but once the excitement and wonder dies down, like most gimmicks it’ll more than likely fade into obscurity and speedy obsolescence. If anything, it’s a reflection of how good old fashioned toying around, music, and technology combine to create things that thrill and get tongues wagging.

Most of the printed albums will go to the people that helped fund the project. Also, a limited amount will be available at Thud Rumble, here.