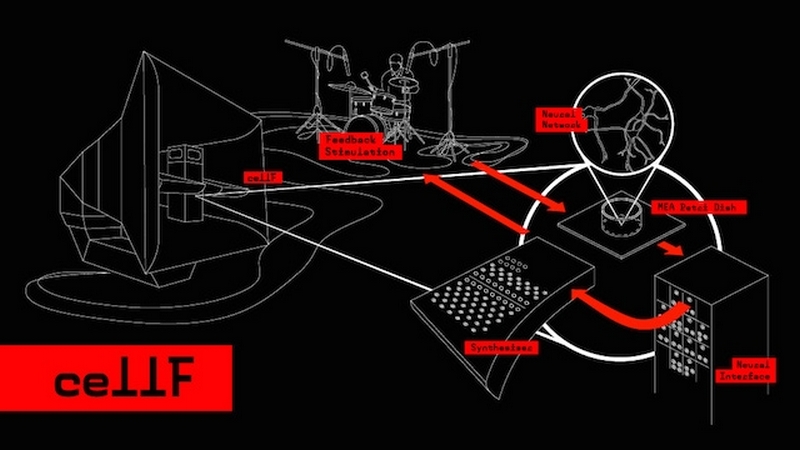 cellF – the world’s first neural synthesizer has been built by an Australian man named Guy Ben-Ary. The cellF synthesiser was created using stem cells from the artist himself.

In 2012 Guy Ben-Ary was given the creative Australia Fellowship to develop a biological self portrait. The first thing he did was to take a biopsy from his arm, and with that he used some high tech to transform the skin cells he collected into stem cells.

The ozzie innovator then took those stem cells and converted them into neural stem cells.  It was on this foundation that he built what could be called the ‘world’s first neural synthesizer’.

There is no programming involved with cellF. It is run simply with analog circuits and biological matter.

This is how the cellF synthesiser works; the music is “fed into the neurons as electrical stimulations and the neurons respond by controlling the synthesiser, creating an improvised post-human sound piece.”

Guy Ben-Ary has always been inspired questions surrounding the “shifting perceptions surrounding understandings of ‘life’ and the materiality of the human body” and also by his boyhood dreams of one day becoming a rock star.

“The project is divided into two parts; the first was to grow my own external brain.  I used Induced Pluripotent Stem Cell technology (iPS) – a method of coaxing cells back into their embryonic state – to reprogram my own skin cells (taken from my arm via a biopsy) and transform them into a functional neural network or my external “brain”. I find the alchemic transformational potential of iPS inspiring as well as intimidating. The second part has been to develop a robotic body to interface to this external brain so that they work in synergy, including a real time feedback loop between them. I was inspired by an ultimately narcissistic desire to re-embody myself. Over the last 15 years I have been engaged in the process of developing robotic bodies whose aesthetics and function are informed by the specificity of each bio-engineered “brain”, I have also been playing around with the idea of exploring new and novel robotic self-embodiment strategies. However, when thinking about what kind of body to design for myself I immediately rejected the idea of working within a humanist paradigm. I decided to give my-cellF a sound producing body and follow my naïve childhood dream of being a rock and roll star.” He wrote