The Behringer Wing is a unique take on the digital mixing console, offering several unique features in a compact form-factor. 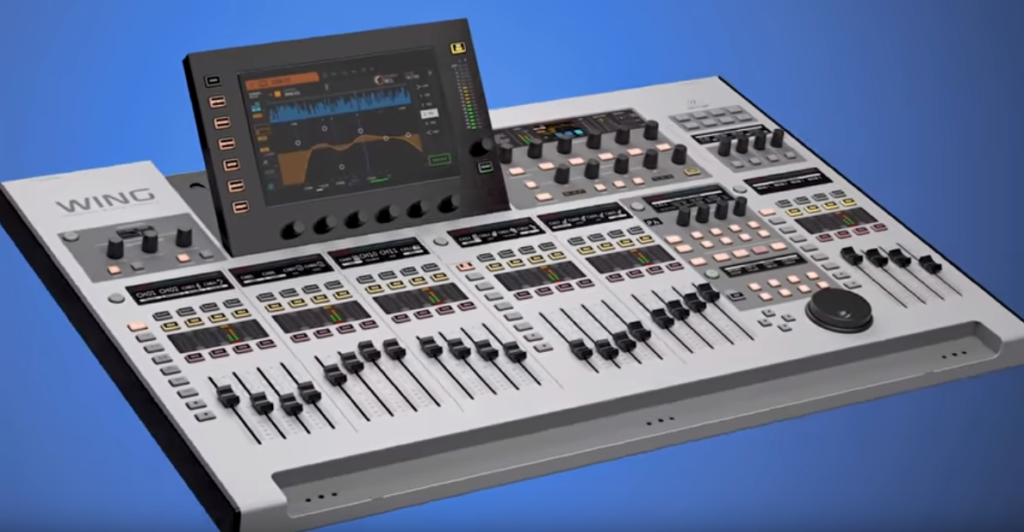 At the heart of the Behringer Wing is its 10.1” capacitive touch-screen offering in-depth control over your mix. All the parameters on the screen are accessible via the channel strip section and various other hardware controls – allowing for simultaneous control by several users. The console offers hands-on control over your mix, and instant recall using the 100mm motorized faders.

The new Behringer console would fit into any home recording studio, house of worship or touring rig alike – using the USB ports, you can multitrack up to 48 channels to a DAW and there are 2 SD card slots, allowing you to multitrack up to 32 channels per card. There are numerous hardware input formats from analog XLR and TRS, powered by MIDAS Pro Series preamps, 3 AES50 connections for stageboxes, Audio over IP, Dante and a brand new format called StageCon – which is an incredibly convenient new transfer protocol, it’s completely configurable and capable of 32 channels in total, with the ability to choose which direction each channel is sending data.

The beauty of the Behringer Wing is how intuitive it is, it almost mimics the way you would configure and use a DAW – offering incredibly fluid workflow, with various ways of achieving most of the everyday tasks.

In terms of audio routing, the console features 48 hardware channels and 16 configurable busses, each are capable of mono, stereo or M/S. There are 16 onboard FX processors split into two categories – standard and premium, and they feature everything from classic Pultec EQ replicas to a new Wing compressor, designed specifically for the console. There’s also a Wing co-pilot app allowing you to connect remotely to the console – great for setting up monitoring etc.

The Behringer Wing is set to retail at USD $3499 (Over R50k excl. duties), which may seem incredibly expensive at first glance, however considering the vast number of features and high-end capabilities, it’s a very reasonable price.