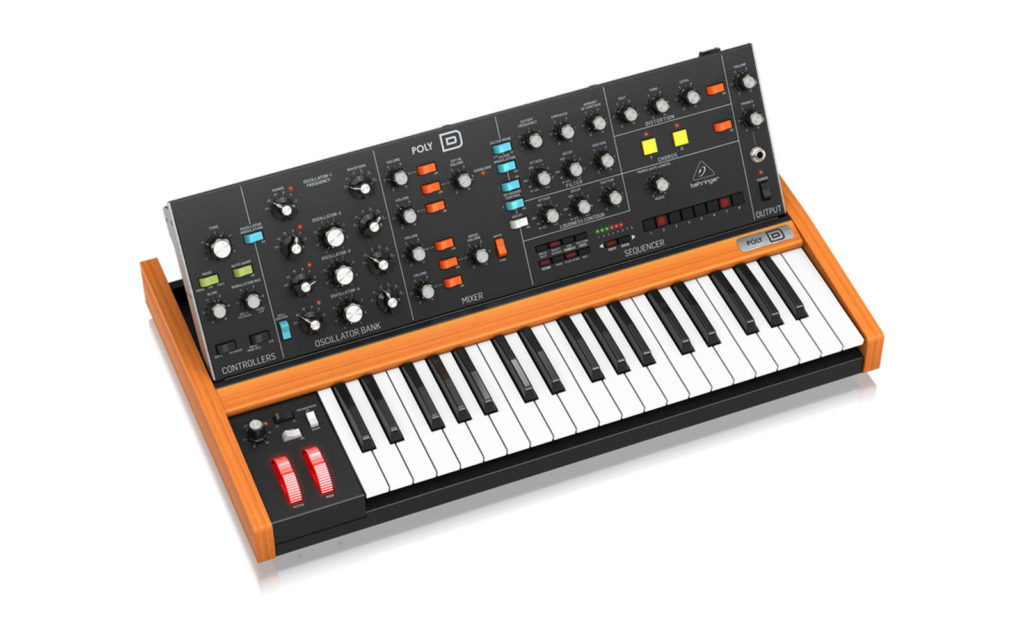 The new Behringer Poly D is clearly based on the legendary Model D synthesizer, originally developed by Moog but recently remade by Behringer themselves.

The new Poly D takes the original concept and widely expands it with an extra oscillator, internal analog effects and a variety of trigger modes – Mono, Unison and Paraphonic.

The synth is capable of creating chords with a single note or in paraphonic mode notes are assigned to an oscillator as you play them, for quick chord and tuning changes on-the-fly.

One of the best things about the new additional oscillator is that you no longer have to sacrifice one of the three oscillators to create an extra LFO.

Some more additions to the synth are the new internal distortion and chorus effects, the distortion is based on some of Behringer’s previous replica models while the chorus is based on the legendary Roland Juno synthesizer.

Behringer has also included a sequencer, capable of storing up to eight banks of eight mono or polyphonic notes.

One thing to note…

The new Behringer Poly D is not a fully polyphonic synthesizer, only the oscillator section has got polyphonic capabilities, the rest of the signal path is mono.

So it may not be as advanced as some of the more modern polyphonic synths, however, this is designed as more of an expanded monosynth than an advanced polysynth.

The synth features MIDI in, out and thru, USB/MIDI, external control inputs and outputs, sync I/O for the sequencer and an external signal input for sending audio through the filter.

There’s an old trick with the Model D, running a signal out of the headphone output into the external signal input creates a feedback loop which adds an interesting distortion effect – this is still possible on the Poly D.

The estimated retail price on the Behringer Poly D is set at USD $699 (Around R10 500 excl. duties) however that might still change closer to production.