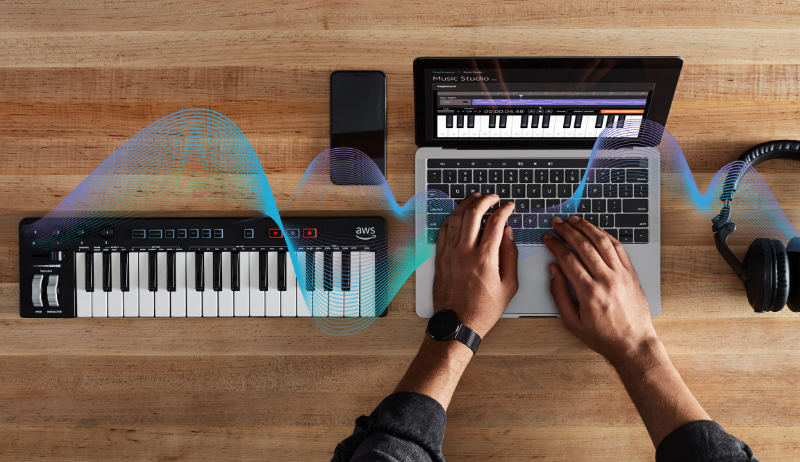 The Amazon AWS DeepComposer is the world’s first musical keyboard powered by generative AI, it’s a 32-key (2-Octave) keyboard with recording and playback options, automated chords, arpeggiators and more. The idea is that the system uses a small snippet of recorded MIDI, to automatically generate ideas to use for the rest of your composition. With just a simple input – DeepComposer can generate ideas in a remarkable variety of different genres.

This is all due to recent ground-breaking advances in AI, a new system called generative networks allows AI to tackle creative tasks on a whole new level. MIT tech review described it as one of the most promising advances in AI in the past decade. It’s the same advance that allowed NASA to build spacecrafts more efficiently than ever before.

A little bit about how it works…

The AWS DeepComposer uses two distinct models, namely the Generator and the Discriminator models. They can be compared with an Orchestra and its Composer, the Orchestra is able to play any music we can imagine, however, it’s the Composer’s job to make sense of it all and guide the Orchestra to create compelling music.

According to Amazon, “no musical knowledge” is needed to use the DeepComposer, though anyone without coding knowledge may need to put in some homework to go beyond the included models. Amazon is primarily aiming the keyboard at developers that want to get started with generative AI. It features a tutorial mode with models created by Amazon, or developers can train their own machine learning models using the included sample code and training data.

Amazon has been in a bit of hot water lately, regarding their ties to the US Immigration and Customs department, with many artists boycotting the streaming service by pulling their music off the platform. This may cause some hiccups in the reception of the new AWS DeepComposer, however, it’s safe to say that the technology involved is exciting.

They’ve announced the AWS DeepComposer to retail at only USD $99 (Around R1500 excl. duties).