The core concept behind the new plugin, Audified SpeakUp, is to streamline the recording and production process for voice-overs. 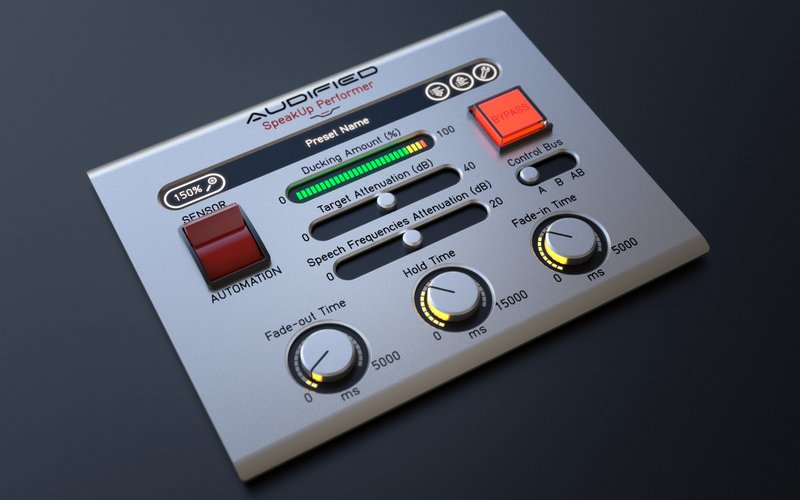 I say “plugin”, however the system is made up of two independent plugins that work together to simplify the voice-over process. SpeakUp Sensor is designed to be loaded on your voice channel, and SpeakUp Performer which receives signal from SpeakUp Sensor and applies changes to the background music channel.

The concept is known as “Ducking” and until now, was achieved through a series of nifty wiring and sidechain compression plugins. Audified SpeakUp aims to create a much more user-friendly approach to get the same professional results.

The internet is buzzing with the sound of independent content creators, platforms like YouTube, Twitch and others allow the freedom to broadcast directly to fans, without relying on record labels. One of the downsides is that often the ones who are not too clued up on the audio engineering side of things, aren’t able to achieve the same professional results. Audified SpeakUp is the solution, an all-in-one system designed to be intuitive and easy-to-use and give you the best results for your voice-overs.

Audified SpeakUp is currently on a launch promotion for USD $99 (Around R1300), up until 31st June 2018 – thereafter it will be USD $139 (Around R1800). It’s very well priced considering the number of hours you could save editing videos!

They’ve released a quick demo video of Audified SpeakUp in action, but it’s not all that informative – so I would suggest grabbing the demo and trying it out. There’s a free 30-day demo for you to try, to see if it suits your needs. Note that the plugin uses Pace’s iLok system, if you’re not familiar how that works, there’s also an explanation on the website.