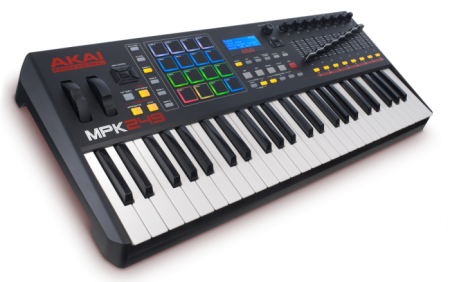 The Akai MPK2 Series was unveiled at NAMM 2014 and they’re now readily available in South Africa. The new additions to the hugely popular MPK series include the 25-key MPK225, the 49-key MPK249, the 61-key MK261 and an updated MPK Mini. Having reviewed the MPK49 in 2012, the new additions certainly look like they have upped the ante in the world of keyboard controllers.

Akai have really put an excellent package together for the MPK2 controllers. Included is a Lite version of Ableton which is cool but what really grabbed our interest is MPC Essentials – a sample-based groove production application and the spectral morphing synth from SONiVOX called Twist.  If you’re in the market for the MPK249 or MPK261 then AIR Music Tech’s Hybrid 3 – a high definition virtual synth also comes with and MPK261 owners can look forward to yet another addition – the SONiVOX Eighty-Eight Ensemble. 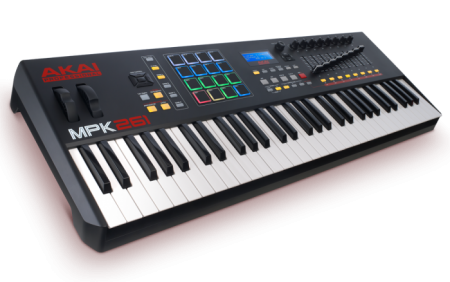 The new MPK2 series is housed in a slimmer chassis and boasts an all new design. The full-sized models feature RGB backlit pads lifted straight from Akai’s iconic MPC Renaissance Beat-machine and a 20-character LCD screen which offers detailed parameter feedback. Akai say that the new MPK2 series is “designed to erase the line between hardware control and software performance,” with new features such as being able to send QWERTY-style commands using soft-controls and their newly refined full-size, semi-weighted keys in the 25-, 49- and 61-key models. Another smart feature we really like is the low-power mode for iOS connectivity via the Camera Connection Kit.

The build quality on Akai Pro products is seldom in doubt but with the new Akai MPK2 Series it seems the leading technology company is determined to up their game even more.  Both the MPK249 and MK261 controllers are optimised to interface directly into your PC or Mac and include tons of control options: 8 assignable knobs, faders, and switches, 16 MPC-style pads with RGB feedback, and onboard transport buttons. Three banks expand the number of knobs, faders, and switches (up to 24 each), and four pad banks expand the number of pads (up to 64 total) offering up plenty of flexibility. The full size keys are semi-weighted and velocity sensitive with after-touch for added expression. The fully featured MPC functionality is ideal for producers looking to lay down a beat with precision and ease and the included software really makes the MPK2 series sound like the perfect studio controller to manage your DAW.

Sure it’s sales talk but Akai Professional Product Manager Dan Gill does make a good point; “The MPK series has been a huge success for us, and these new models incorporate five years of customer feedback that deliver even more capability to keyboard players and music producers. By providing users with superior control capabilities and powerful music creation software, the latest additions to the MPK family are an instant upgrade to any studio or stage setup.”

The Akai MPK2 series is distributed by Musical Distributors in South Africa.