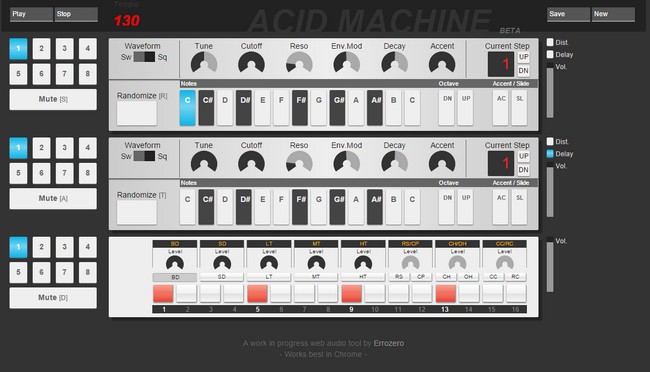 Acid Machine could be the first online 303 emulator. The TB303 was – and still is – such an influential piece of tech in dance music that dozens of software synth emulators have been developed over the years, some professionally and some for fun. The best known of these is probably  Propellerhead’s ReBirth, released a good few years before Reason became their main product.

Of course the 303 is often thought of as only being part of the ‘Acid House’ generation, hence I guess the name of this emulator being Acid Machine, but today you will still hear 303 sounds in a lot of music. In fact 303 sounds seem to be favoured by many of the EDM guys these days too.

Acid Machine is a web based tool which includes a drum machine and two TB303 bass synths. You can create patterns and a drum track and even record and save your finished track.

It’s a clever idea created by a Multi-Media company called Errozero in Liverpool, UK but it’s still a work in progress as they point out. For example the Closed and Open Hats share the same channel and the volume does not work on this, which makes the hats way too loud on the drum track. Anyway have a go. It’s 5 minutes of fun you may never have had…

Check it out here.