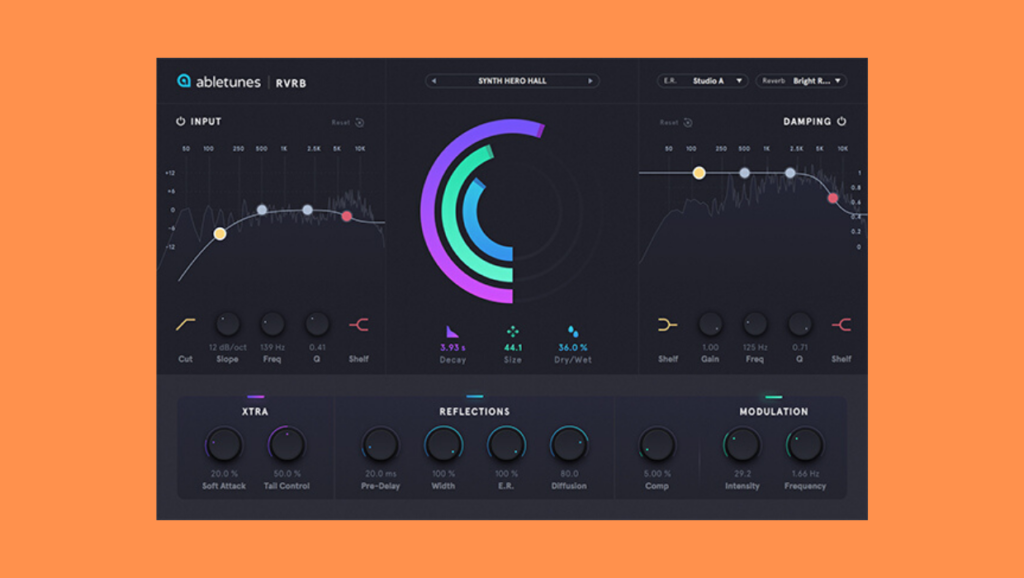 The all-new Abletunes RVRB claims to be the “modern reverb for modern producers” and it certainly prides itself on some more interesting built-in features. It comes packed with 12 built-in reverb algorithms ranging from rooms and studios to halls and plates.

The plugin features an internal EQ on both the input stage and the damping stage of the reverb, giving you ultimate flexibility to carve out the exact frequencies you want to send through to the reverb and which frequencies ring out while others are dampened.

Like you would expect on a reverb plugin, it’s got decay, size and dry/wet which take up centre-stage, and pre-delay, stereo width, Early Reflection and diffusion. Some of the unique features in this plugin are an internal compressor on the reverb tail, a soft-attack setting which smooths transients and a tail control setting which limits the length of the reverb tail to clean up unwanted reverb tails and overlaps which is great for a wide variety of mixing and sound design applications.

The plugin features real-time spectrum analysis on both the input stage and the damping stage, which is great to be able to quickly visualize if there are some sub frequencies sending through to the reverb that you may not have noticed.

There’s a modulation section featuring a chorus effect with variable frequency and intensity allowing for everything from subtle variation to retro sound effects.

Abletunes RVRB comes bundled with 60 carefully made presets to get you started straight away, it’s compatible with all major DAWs except ProTools and Studio One Prime, comes as a VST and AU and it’s retailing at USD $99 (Around R1500 excl. duties).

For more information check out the Abletunes website here.