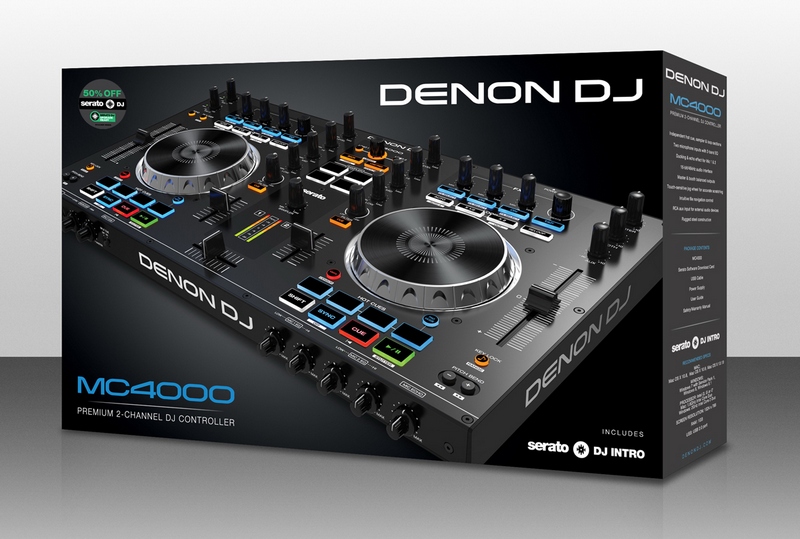 The MC4000 from Denon DJ is the company’s first new controller in some time.

In fact it’s been so long it was easy to forget what a solid brand Denon DJ has always been and I am pleased to say that this new 2-channel DJ controller is a strong reminder of the exceptional quality they have always delivered. In fact there was a time where Denon DJ and Pioneer DJ went head-to-head with their mixers and CDJ/media players and although the latter has clearly forged ahead in the race, the MC4000 signifies a welcome return in my opinion.

Often when one looks at a piece of gear online, whether it’s a picture or a video, it’s not always that easy to get the full idea of the product.But unpacking the MC4000 I’d think anybody purchasing this DJ controller will feel like they’ve made a good choice.

The unit is suitably heavy (4 Kg) without reducing its portability and the dimensions are similar to that of a Traktor Kontrol S5 or S4, with a width of just over 50 centimetres. That’s almost two rulers to get an idea. It’s about the ideal size to be honest. Small enough to fit in a bag and on most decent DJ tables in clubs, but also big enough to offer great ergonomics in use.

In fact to sum up my first impressions I found myself looking at a unit that just looked and felt right in every department – nice clean layout, lots of space between each control, solid faders and rotaries and decent size jogwheels.

Denon was taken over by InMusic last year and this is their first release since. But the MC4000 is pure Denon DJ with no real hints of Numark to be seen.

The MC4000 is exceptionally well laid out.

There’s only so much one can do with an all-in-one DJ Controller layout but two areas where manufacturers sometimes drop the ball are in cramming the controls too close together to save space (something Denon have been guilty of in the past) and then sometimes placing basic and often-used functions in daft locations.  The MC4000 suffers neither. In fact the space between everything is plausible and each part feels high quality.

If you look at this image below you’ll see that the top left hand section hosts the two mic volume controls plus echo/talkover buttons, the top right hand section the master out controls. Likewise there are two equally visible FX sections with ample controls. I love how it’s all so neatly compartmentalised.

I really like the prominence of the sampler section with its 4 pads and volume rotary. On-the-fly sampling is probably one of the most under-utilised features in Serato. I blame the placement and functionality of this on the way these are often located on DJ controllers. But somehow on the MC4000 it feels like it should be used. 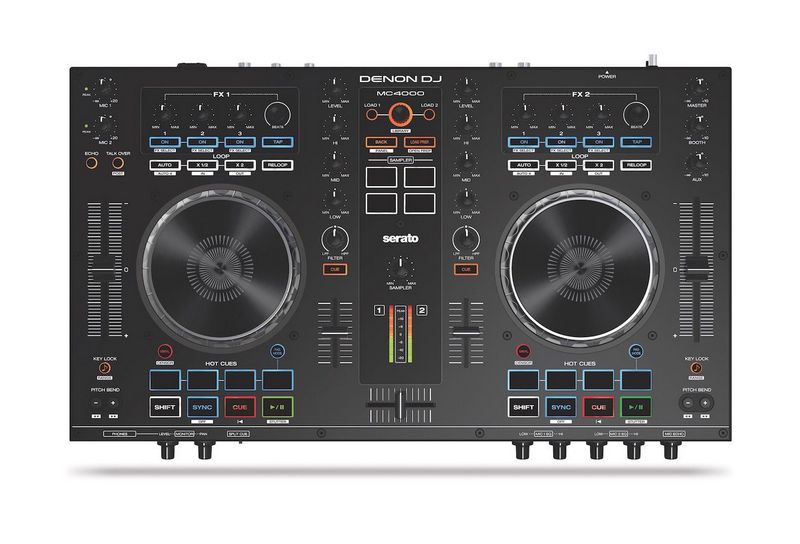 The MC4000 has all the bells and whistles of a professional 2-channel DJ controller. Notable add-ons include two mic inputs and corresponding 2-band EQ and separate volume controls for each. There’s the obligatory talkover option but also a built in echo for some added zest – this is great for mobile DJs ‘amping’ up the crowd at a function but also could be used by an MC dropping some rhymes if you’re a Hip Hop DJ.

Pro features such as balanced XLR out and separate booth outputs for monitoring and long throw pitch control sliders all confirm the level of unit this is.

The jogwheels are really tactile as are the 4 performance pads and each channel has independent gain, 3-band EQ and filter rotaries. The FX sections (FX1 & FX2) are excellently grouped with the looping functions too.

There are only 4 performance pads on the MC4000 but in actual fact you still get the full 8 pad functionality. All you have to do is press the ‘Pad Mode’ button to toggle between these. So for hot cues you’d have 4 upfront and then when pressing Pad mode the other 4 would reveal themselves if setup. But the pads do more than just cue point; if you hold the Pad Mode button down you can press one of the 4 pads to activate its functionality; these include a cue loop mode, and a loop roll.

The only potential negatives on an otherwise exceptionally well crafted controller (other than 4 pads and not 8) is that the crossfader and channel sliders are all pretty short and that there are no VU’s per channel. Neither bothered me one bit.

I am very impressed with the MC4000. The price of the unit is very good and I’d say the quality probably shades controllers that are currently 3-5 grand more. The most important thing is it looks very PRO, sounds great and seems to be built to last the rigours of continuous use and being thrown in and out of bags.

But don’t just believe me. A colleague bought one recently and has been using it for about a month. I’ll let him have the last say…

My 3 favourite things about the Denon DJ MC4000

While looking for a controller I found that most had some great features, but would exclude other important features. I couldn’t find one that ticked all the boxes. The MC4000 has all the ins and outs a mobile DJ needs; 2 Mic inputs with FX and Talk-Over. A really important feature for me is the Aux in, which lets me connect a phone or CD player in case of emergency or song request someone might have on their phone.

The MC4000 is really solid and well built. None of the parts feel cheap. Despite the fact that it is solidly built, it has a design that is compact enough, yet all the controls are well spaced out and nothing feels too cramped.

Due to the simple layout of the controller, the playability is really great. So you can really get creative with your performance without having to use too many shortcuts. Everything is in the right place.