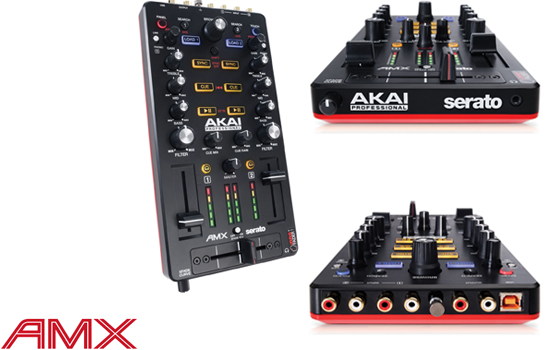 The Akai AMX Mixer and Controller is one of two modular units designed to work with Serato DJ, the other being the Akai AFX. These were announced in August last year and immediately piqued my interest since they instantly reminded me of Native Instruments’ Kontrol Z1 mixer and X1 controller, respectively.

The Akai AMX is weighty and solid but as you no doubt can tell from the images, pretty portable too. It is well built with a plastic facia and housing and boasts the same knobs found on the Numark NS7II. If you don’t know, Akai Pro and Numark are owned by the same holding company and when the AMX and AFX were announced Numark actively promoted the gear. The AMX also has an innoFADER crossfader built in which is removable/replaceable and should impress scratch DJs.

The AMX does not stand too high despite the four rubberised feet and should fit comfortably in your laptop bag. On the back are 6 gold plated RCAs, a USB port and a grounding terminal.

The RCAs comprise of one set of master outputs and two sets of inputs (one for each channel) which can be used to connect either turntables or CDJS, both of which can be used in DVS mode (Timecoded CDs or vinyls) or to simply operate as a mixer. There is a bit more to this which I will address later.

The front facia sports matching controls on either side with 4 universal controls. It’s fairly cramped, but certainly not unmanageable and once I got my bearings as to what everything does, it’s pretty intuitive and easy to operate. 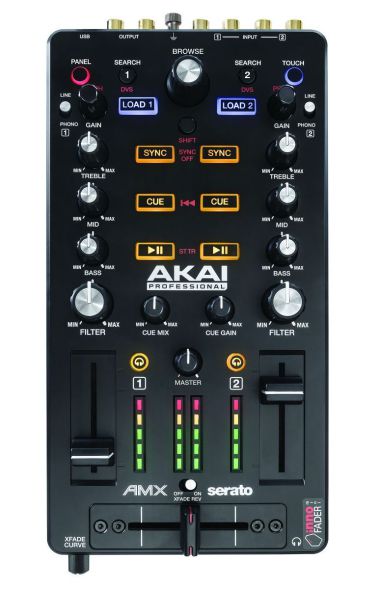 The AMX setup is pretty straight forward. If you’re on MAC simply download the Serato DJ software, plug in your device and it’ll start working. Windows users will need to also download Serato – no discs are supplied with the AMX controller and this seems to be the norm these days – and then also download the Windows USB drivers which can be found on the Akai AMX product page. Once you’ve installed the Windows driver the AMX is completely mapped to Serato DJ, so simply load up a tune and start having fun.

The AMX is primarily a mixer with transport features included. Kitted with 3 band EQ, a gain knob, a nice big filter knob – I still think Serato’s filter trumps Traktor’s anytime – VU meters and volume sliders  per  channel  plus a crossfader with an adjustable Xfade curve and reverse button, it pretty much has all the essentials of a regular two channel mixer. There is of course a master volume and cue gain controls as well as headphone PFL buttons per channel. The headphone jack is ¼ inch but all pro headphones are equipped with detachable full size jacks these days so this is perfectly acceptable too. The channel sliders are quite stiff whilst the crossfader is decidedly loose. Each channel also has a line/phono switch to switch the impedance on the input RCAs should you wish to use the AMX as a standalone mixer and play records or CDs through it.

I think this is a good time to explain how the AMX works in standalone mode.

As a controller and software mixer the AMX is good to go. However if you wish to use it as a DVS controller – i.e. with Timecoded turntables or CDJS you will need to purchase the DVS expansion pack. This is currently $99 on the Serato site. Likewise if you wish to use the AMX as a standalone mixer you will also need the DVS Expansion Pack. This is because the control to switch the unit from controller to audio thru mode is done in the software. There is no hardware switch and this feature is part of the expansion pack. One should also realise that Serato DJ needs to remain loaded even in ‘standalone mixer’ mode since the software manages the through-put of the audio from the RCA inputs. The AMX is USB powered so even in stand-alone mode one would naturally keep it plugged in to your computer since a mixer cannot work without power! 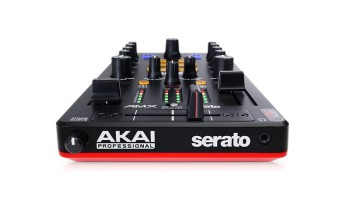 As a controller the AMX sports all the basic features other than jogwheels and is very well thought out. Each channel has Play/Pause, cue and sync buttons in the transport section, track load buttons per channel and a nice big library browser knob. A shift button, when used with certain other controls gives these a secondary function.

For example if you hold down shift and turn the channel gain knob you can adjust the tempo of the track.  Shift is also used for secondary transport functions such as deactivating the sync button, play/stutter mode and to manage the DVS.

Although most are likely to use the sync button to beatmatch, despite no jogwheels you can mix manually with the AMX and it’s actually loads of fun. Holding in the DVS/Search button and turning the browser knob either clockwise or counter-clockwise will pitch bend the track back and forth and it works very well.

The Touch button is a really cool feature. When activated the EQ’s can be killed by simply touching the respective knob. But the real fun starts with the Filter. When Touch is activated a crazy ‘filter-roll’ will loop the track in progressively shorter loops as you turn it whilst applying HPF or LPF. When you let go the knob the track will continue playing from where it would have been before. This feature is addictive I tell you!

Who would use an AMX? 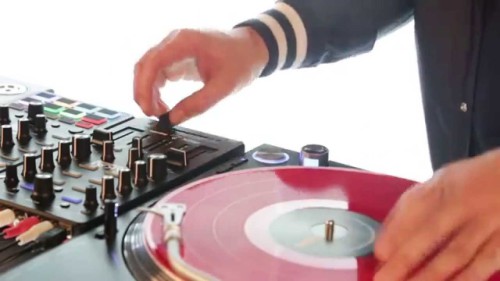 If you are familiar with Serato DJ then you will know that anyone can download the program and use it, but it is always limited to just one playback deck if no controller or DVS card is attached. This has always been Serato’s way of ensuring nobody uses their software for free. The frustrating thing about this though is that if you simply want to jam some tracks on headphones or create some preparation playlists you’d always have to connect everything. This hasn’t changed but it will certainly make things simpler with the very portable AMX. Since the controller has a built-in Audio interface the AMX is the ideal unit for professional DJs to carry for personal use in hotel rooms or otherwise. You can practically sit with it on your lap if you like!

If you plan to use DVS the AMX is an ideal 2-channel mixer which offers you all the mixer, browsing and transport functionality you will need.

Lastly if you want to simply use the AMX as a controller with Serato and perform, it does the job very well and makes for an extremely portable setup. Just an AMX and your laptop and you’re pretty much good to go.

As a modular unit, the AMX and AFX together  pack quite a punch as you will then have absolute control of Serato including hot cues, looping, sampling and effects so I am pretty sure we’ll see DJs performing of these two units side by side.

I like the Akai AMX. There are 1 or 2 things I may have done differently and the odd improvement such as scrolling through a track that needs to be addressed. But it is a well thought out piece of gear that is quick and easy to get going.

The AMX and AFX are without a doubt the Serato user’s answers to NI’s Z1 and X1 for Traktor. Except what essentially takes 3 pieces of kit – the X1, Z1 and F1 for Traktor, you can achieve with just two on Serato – the AMX and the AFX! 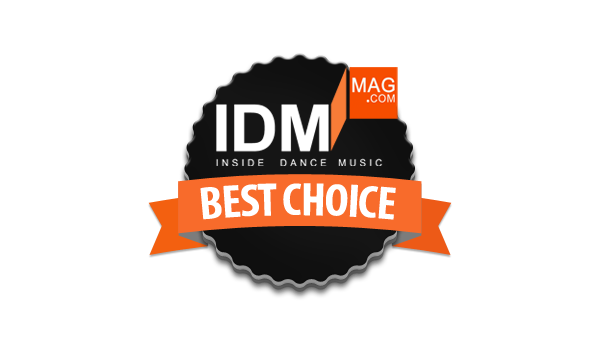