You are here: Home / News / The House Music Summit brought to you by GOGO Music, House Afrika

The House Music Summit is brought to you by GOGO Music, House Afrika, & Hit Refresh.

Two of the biggest names in house music in South Africa will form part of the House Music Summit that will be taking place on the 10th of October 2015 at the Tropicana Lounge in Bloemfontein.

House Afrika has been an integral part of the South African electronic dance music scene for more than twenty years. When House Afrika gives you the nod then you pretty much know that you’ve arrived in the local industry. The House Afrika discography includes the names of memorable and remarkable artists such as DJs At Work, DJ Fresh, Nastee Nev, Chymamusique Liquideep, and Oskido.

The premiere soulful club music platform, GOGO Music is firmly rooted in the South African deep house culture, featuring releases from Ralf GUM the label boss himself. Other collaborators include the soulful and stunning vocalist Monique Bingham and local artists such as Black Coffee, Bucie, Christos, and Zano.

Hit Refresh which airs on Vuzu every Friday night, is an interactive TV show featuring DJ sets from some of the top DJs in the country who all know how to get a dance floor going, including an innovative on screen social chat. 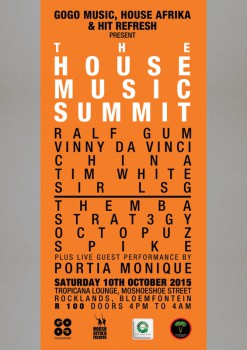 If you’re in Bloemfontein next month and you are a house music fan then you will most certainly not want to miss the House Music Summit.  And if you are Bloemfontein local then you have no excuse to miss out either. With Ralf GUM and Vinny Da Vinci headlining it is sure to be great party.