Ryan Murgatroyd’s Swoon Recordings is celebrating their one year anniversary with an amazing original release featuring the emotive vocals of South Africa’s own, Sobantwana and also a remix by Zaloz.

Though only a year old, they tell us that the Swoon Recordings imprint has seen massive success since its creation in June 2019.

They’ve managed seven releases to date and have many more in the works.

The initial concept behind Swoon stems from their passion for boundary-pushing traditional club music that leans towards the deep and soulful elements of house music, which has already seen the label garner international recognition as one of the leading players at the forefront of electronic music.

With an already impressive catalogue of both international and local artists on the roster and some of South Africa’s finest since their debut release, they have decided to celebrate with a homage to their creator in typical Swoon style by releasing a stunning new two-part EP from label boss, Ryan Murgatroyd, Sobantwana and Zaloz titled, ‘Wooma’. 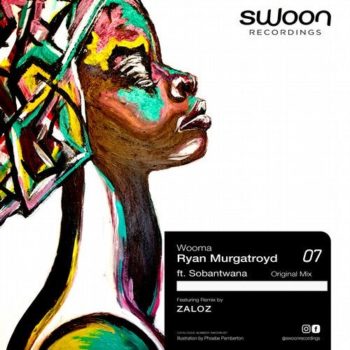 Exploring the more poignant and emotive elements of electronica, Ryan Murgatroyd’s pursuit of perfection in his productions shines through in his outstanding original production, delivering a breath-taking deep house masterpiece filled with ethereal atmospheres, energetic groove-based rhythms and emotive vocal elements added by Sobantwana to complete this sonic masterpiece.

Crafting vibrant elements into the beat that encapsulates both the body and mind and holds true to the originals ideology, all the while stepping into a new frontier that Zaloz has become known for, allowing them to close off the EP in style.

“It’s been 3 years and 3 continents to complete this record.

“It has such a special place in my heart because it encompasses this sound that I think personifies Swoon, a touch African, cinematic, dreamy and emotive, but unmistakably uplifting.

“I think we did 10 versions of the riff before we settled on this, I’m really excited to see it finally leave the lab and head out into the world”.