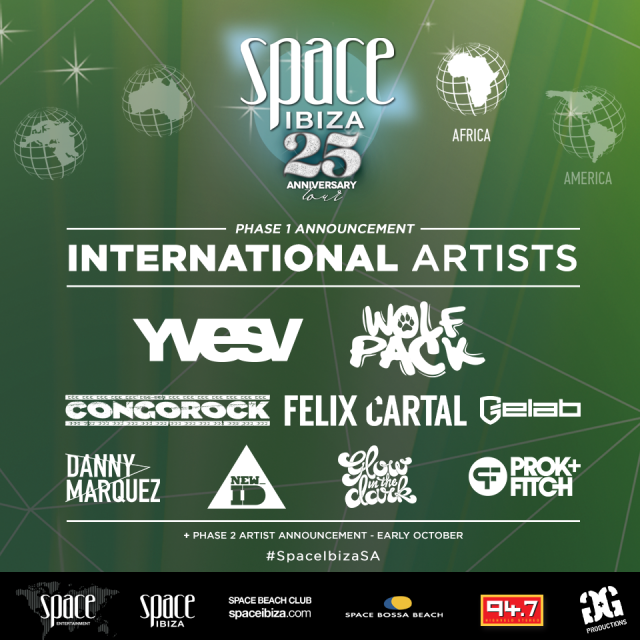 Space Ibiza returns to South Africa on 29 November 2014 for a one-night event in Johannesburg at a Sandton Central, Block Party.

They are celebrating 25 years in the business and as part of their anniversary tour Space Ibiza is visiting 25 cities. Get it? 25 years and 25 cities!

The event is a collaborative one between Space Ibiza, G&G Productions who brought you the Sensation party last year and – if you ever needed convincing that dance music has reached new heights (or lows) of commercialism – 94.7 Highveld Stereo have jumped on the bandwagon too.

Probably best known for their Sunday Sessions called “We Love… Space’, any nightclub that can last 25 years as Space Ibiza has on the white island deserves more than just a little credit so kudos to them for keeping going as long as they have and with such a high level of consistency. The quality of DJs who have passed through their doors to perform is pretty impressive too; Carl Cox – who we interviewed just last year, Josh Wink, Steve Lawler… heck even Moby has done a DJ set there. Richie Hawtin launched his Enter nights at Space last summer and continues that success this year too.

Here are the first phase of international DJs that have been announced:

Look out for the second phase of DJs to be announced soon.

General (Allows entry to the main event and main stage)

Space Ibiza 25 Year Anniversary Tour will be held at the Vodacom Building and The Sands, Weirda Road East, Sandton Central.